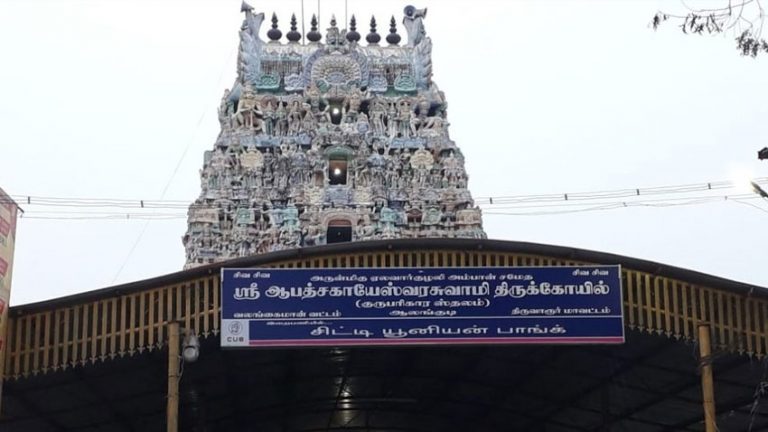 Alangudi or Apatsahayesvarar Temple is devoted to Apatsahayesvarar form of Lord Shiva – the one who digested the poison of Serpent King, Vasuki to save humanity from its toxin during Samudra Manthan. This divine temple is renowned for being the holy abode of the planet Jupiter or Brihaspati and often referred to as the “Guru Sthalam” dedicated to Guru Bhagavan (planet Jupiter). Apatsahayesvarar Temple in Alangudi is one of the famous Navagraha Temples where one can propitiate Lord Guru who is worshipped here in the form of Sri Dakshinamurthy. Thousands and Lakhs of people throng Alangudi Apatsahayesvarar Temple, especially on the day of Jupiter’s transit to the next sign, to seek Guru Bhagavan’s protection from afflictions. Guru Bhagavan’s benign look (Drishti) can shower a lot of blessings from him. Revered for his excellence in wisdom, education, and fine arts, possessing supreme intelligence, Guru Bhagavan is also known as Brihaspati.

In this blog, let us check out the Speciality of Apatsahayesvarar Temple in Alangudi:

Alangudi Apatsahayesvarar Temple is believed to have been constructed by an ardent devotee of Lord Shiva named Amuthokar whowas the minister of a King named Masukuntha Chakravarti. He was beheaded by the Kingas he refused to give up his merit of virtue in the king’s name. However, the temple reverberated with the minister’s name “Amuthokar” when he died. This scared the King, and he realized his mistake. So, he started worshipping Lord Shiva with ardent devotion for getting relieved from all his Doshas of killing a Shiva Devotee. Thus, he was relieved of all his Doshas.

LEGENDS OF APATSAHAYESVARAR TEMPLE IN ALANGUDI: Legend has it that when Devas and Asuras were churning the Paarkadal (Cosmic Ocean) for the Amrutha (the nectar of immortal life), a deadly poisonous fumes (Alakala Vesham) from the Serpent King, Vasuki disturbed them. Hence, the Devas and Asuras approached Lord Shiva for deliverance. Without further ado, Lord Shiva took the deadly poisoninto his throat and swallowed it. As per the myth, serpent Vasuki’s poison has the power to kill anyone on earth, hell, or heaven if they come in touch. Since Lord Shiva took it himself to save the three worlds from the effect of the deadly poison, the Lord is known by the name ‘Apatsahayesvarar’ which means ‘rescuer’ in the Tamil language. Also, the place came to known as Alangudi (Alam – Poison, Kudi – Drink).

Alangudi Apatsahayesvarar Temple is the “Guru Navagrahasthalam” dedicated to planet Jupiter or Brihaspati who is known for his excellence in wisdom, education, and fine arts. Hence, devotees flock to Alangudi Apatsahayesvarar Temple to offer their respects to the all-knowledgeable deity for long life, good education, prosperity, and valor in life. It is believed that those worshipping Guru Bhagavan here on Thursdays are blessed with all welfare in life. Also, those afflicted with snake planet aspects are said to get relief here.  It is strongly believed that Guru Bhagavan graces His blessings to devotees if they light 24 ghee lamps and do 24 rounds of Pradakshina around the Shiva shrine. It is also considered auspicious to offer Chick Pea (Konda Kadalai), Yellow Cloth, Yellow Lentils and White Jasmine (Vella Mullai) to the Guru Bhagavan on Thursdays. Guru Peyarchi Festival is the main celebration of Alangudi Apatsahayesvarar Temple which marks the day of the transition of planet Jupiter from one zodiac symbol’s constellation to another’s. Masi Maham, the Chariot Festival of Lord Dakshinamurthy, the ten days long Chaitra Pournami Festival, Chitthirai Purnima, Thai poosam, and Panguni Uthiram are the

other festivals celebrated here with much pomp and devotion. The rituals of Alangudi Apatsahayesvarar Temple comprises four steps: the sacred bath – Abhisheka; bedecking – Alangaram; the Prasad offering – Naivethanam; and the Puja with lamps –  Deepa Aradanai.

Pay a visit to Apatsahayesvarar Temple in Alangudi on your next trip to Tamilnadu and immerse yourself in the divinity and blissful aura of the temple. May Guru Bhagavan blesses you with all richness, luck, and health in your life.