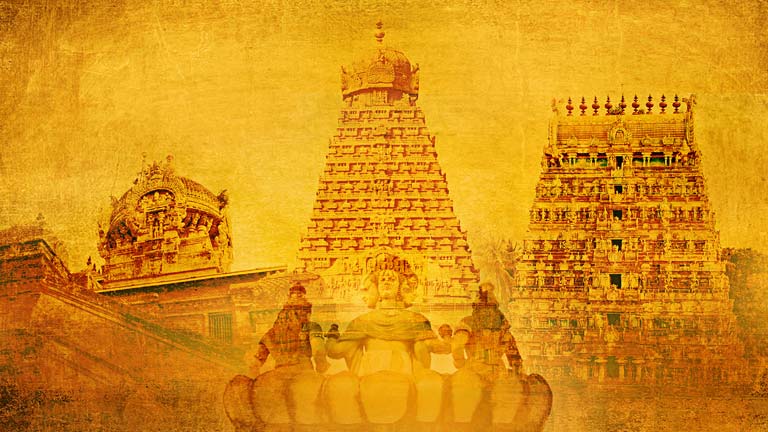 The beauty of travel is exploring the smell, taste, sights, sounds, and essence of a place – new or familiar and meeting people of different cultures, with distinctive lifestyles and diverse traditions. At the same time, pilgrimages add another ingredient to travel – spirituality. Tours like this take you to places of spiritual importance that allow you to encounter, see, and experience the Divine, creating an everlasting impression that will inspire you for years to come, maybe even for the rest of your lives.

When it comes to pilgrimage tourism in South India, there can be no better option than the spiritually significant and extremely divine “Temple city of India“, Tamilnadu. Dozens of religious places and sacred shrines that carry generations’ worth of history and faith dot the beautiful and vast landscape of Tamilnadu. Temples in Tamilnadu receive hundreds and thousands of pilgrims from far and wide every year. The divine aura and spiritual solace offered by these sites give a deep, soulful satisfaction to the pilgrims. The outstanding ancient temple architecture and the awe-inspiring stories associated with them are the other reasons why Tamilnadu Temples are so famous among pilgrims.

August to Mid-March is regarded as the best time to visit the pilgrimage sites in Tamilnadu. The weather will be pleasant and apt for travelling around the state during this time of the year.

If you are thinking about embarking on an inspiring spiritual voyage or pilgrimage trip to Tamilnadu, continue reading this article and find out the Best Religious Places/Pilgrimage Sites in Tamilnadu.

From our list of Best Religious Places/Pilgrimage Sites in Tamilnadu, take your pick:

Madurai: – The Cultural Capital of Tamilnadu

Madurai is Tamilnadu’s ultimate pilgrimage destination. It is the oldest continually inhabited city in the Indian peninsula with a history that dates back to the Sangam period of the pre-Christian era. Studded with hundreds of temples, Madurai offers pilgrims an unforgettable spiritual experience.

More and more pilgrims visit this ancient historic town to pay homage to Goddess Meenakshi, who is an avatar of Goddess Parvati at the world-famous Madurai Meenakshi Amman Temple, which the place is famed for. The annual 10-day Meenakshi Thirukalyanam held between April and May attracts 1 million visitors from all parts of the world.

Besides Meenakshi Amman Temple, Arulmigu Subramaniya Swami Temple at Thiruparankundram; third among the six holy abodes of Lord Murugan known as “Arupadai Veedu“, Pazhamudhircholai Murugan Temple at Alagar hills – Sixth among the Arupadai Veedu temple of Lord Murugan, this is the only place where he graces the devotees with his consorts Valli and Deivanai, Vandiyur Mariamman Temple, Arulmigu Kallazhagar Temple, Koodal Azhagar Temple, Sri Mavoothu Velappar Temple, Arulmigu Yoga Narasinga Perumal Thiru Kovil at the foot of the Yanaimalai hills, Samanar Jain Hills at Keelakuyilkudi and St. Mary’s Cathedral are some other popular religious places to visit in Madurai.

Often referred to as the ‘Golden City of a Thousand Temples’, Kanchipuram is a much sought-after pilgrimage site in Tamilnadu for Hindu devotees. It is considered the second holiest city after Varanasi. The temples of Kanchipuram are known for their marvelous architecture and grandeur that bear testimony to the brilliant craftsmanship of sculptors and artisans of ancient South India.

The ‘City of Monolithic Temples‘, Tiruvannamalai draw a massive crowd of devotees every year. This popular pilgrimage site in Tamilnadu is known for housing the famous shrine of Lord Arunachaleswarar.

Arunachaleswarar Temple in Tiruvannamalai is one of the Pancha Bhoota Sthalams, specifically associated with the element of fire, or Agni. The festival of Karthigai Deepam celebrated on the full moon day between November and December is a major event here which sees more than three million pilgrims annually. Adhi Tiruvarangam and Ulagalantha Perumal Temple at Tirukoyilur are the popular Lord Vishnu temples near Tiruvannamalai.

Rameswaram is without a doubt one of the most popular pilgrimage destinations in Tamilnadu. Rameswaram, which is often considered as Varanasi of the South is home to one of the most famous Shiva shrines in India, Ramanathaswamy Temple.

Rameswaram Ramanathaswamy Temple is closely linked with the great epic Ramayana and is believed to be the place where Lord Rama worshipped Lord Shiva to seek forgiveness for his sins after his battle with Ravana. It is one of the twelve Jyotirlingas (lingam of light) in India. There is a popular belief that a pilgrimage to Kashi is incomplete without a visit to the holy Rameshwaram Temple. Along with Ramanathaswamy Temple, the Five-Faced Hanuman Temple, Thiruppullani, Kothandaramaswamy Temple, Nambu Nayagiamman Temple, and Dhanushkodi Temple are the major religious shrines to visit in Rameswaram.

The ‘Metro City Devoted to the Gods‘, Trichy also known as Tiruchirappalli is another famous pilgrimage site in Tamilnadu that enthralls you with a host of temples and other religious sites. Boasting of world’s oldest rock temple – Rock Fort Temple to the world’s largest functioning Hindu temple – Srirangam Sri Ranganatha Swamy Temple, Trichy is a must-visit for pilgrims. Jambukeswarar Temple at Tiruvanaikovil near Srirangam is one of the five major Shiva Temples in India which represents the five prime elements of nature earth, water, fire, air, and ether (Pancha Bhoota Stalam). The temple represents the element of water, or neer in Tamil.

The cultural hub of Tamilnadu, scattered with myriad ancient temples that are works of art, Thanjavur (Tanjore) is one of the best places for spiritual tourism in the state. There is one place that steals all the attractions here, the truly majestic architectural masterpiece, Brihadeeswara Temple also called as Rajarajeshwaram and known locally as Thanjai Periya Kovil (“Thanjavur Big Temple”) and Peruvudaiyar Kovil.

The temple is a very popular UNESCO World Heritage Site in Tamilnadu that comes under the “Great Living Chola Temples”. Dating back to 1,012 years and adorned with unique carvings and sculptures, Thanjavur Brihadeeswara Temple is worth visiting. On a pilgrimage trip to Thanjavur, you can also visit Gangaikonda Cholapuram, Thanjai Mamani Koil, Alangudi Guru Temples, Chandra Bhagwan Temple, Bangaru Kamakshi Temple, and Schwartz Church.

Kumbakonam is one of the holiest pilgrimage sites in Tamilnadu held sacred by both the Vaishnavites and the Saivites. This idyllic temple town is home to around 188 temples.

Devotees visiting Kumbakonam can also take on a temple trail of nine shrines dedicated to Navagrahas or nine planets. Agniswarar Temple also known as Kanjanur Sukran Temple (Temple for Sukran (Venus)) at Kanjanur, Suriyanar Kovil near Aduthurai in Thanjavur which is dedicated to the the Sun-God (One of the Navagraha temple), Tirunageswaram Naganathar Temple also known as Rahu Stalam (temples associated with the nine planet elements, the Navagraha Stalas, and specifically Rahu), Apatsahayesvarar Temple or Guru Sthalam (Temple for Guru Bhagavan (Jupiter)) at Alangudi are the most famous among them.

The Mahamagham Festival which takes place once in 12 years attracts a lot of pilgrims and devotees to Kumbakonam. There are very few temples dedicated to Lord Brahma in the world and Kumbakonam is one among them.

At Kumbakonam, pilgrims and devotees can take part in pilgrimage tours to Navagraha Temples, dedicated to the nine celestial planets according to Hindu astronomy.

Mayiladuthurai is another popular pilgrimage site in Tamilnadu. The place is peppered with amazing temples that attract pilgrims and tourists from across the world. The most prominent among them is the Mayuranatha Swamy Temple which is dedicated to Lord Shiva. Legend has it that Goddess Parvati who had been cursed to be turned into a peahen came here to worship Lord Shiva in that form. Hence, the town was named Mayiladuthurai or peacock town.

Chidambaram is considered a sacred pilgrimage site for devotees of both Lord Shiva and Lord Vishnu. This holy town is noted for its many temples which are a marvelous rendition of the Dravidian style of architecture. The biggest attraction of Chidambaram is the remarkably famous Thillai Nataraja Temple or Chidambaram Nataraja Temple which has influenced worship, architecture, sculpture, and performance art for over two millennia.

The beautiful temple depicts Lord Shiva in the form of Nataraja, the cosmic dancer. It is one of the famous Panchabootha Sthalams where the Lord manifests the sky. Thousands of devotees flock to the temple to participate in the annual chariot festival held between December- January as well as in June-July. Natyanjali Dance Festival which is held during Mahashivratri also attracts swarms of visitors. Thillai Kali Amman Temple is another must-visit temple in Chidambaram.

You cannot miss Palani while planning a pilgrimage tour to Tamilnadu. It is home to one of the most sacred Hindu shrines in South India, Palani Murugan Temple, also known as Arulmigu Dhandayuthapani Swami Temple, where more than 7 million pilgrims congregate to worship Lord Murugan every year.

This tiny coastal town is one of the most esteemed pilgrimage destinations in Tamilnadu. Thiruchendur Murugan Temple is the prime attraction here which attracts millions of pilgrims from all across the world. It is revered as the second Arupadai Veedu (six holy abodes) of Lord Murugan and is said to be more than a millennia old. The Skanda Festival celebrated in October-November witnesses myriads of devotees every year. This is the only temple of Lord Muruga situated on the seashore.

Velankanni is one of the most sacred Christian pilgrimage sites in Tamilnadu. Velankanni Church or the Basilica of Our Lady of Good Health which is known for many miracles is the crowning glory of this holy town of Velankanni. It is believed to be the holy site where Virgin Mary grants all wishes, and all prayers come true.

The church is visited by millions of people from all over the world, irrespective of their religion. Though pilgrims and devotees try to make visits year-round, the crowds swell every year between the 29th of August and the 8th of September when the church hosts the extremely popular Velankanni Festival, also known as the Feast of Our Lady of Health. This glorious festival commemorates the miracles that occurred around the Velankanni Church premises in the 16th century.

Nagore is a famous Muslim pilgrimage site in Tamilnadu. The main attraction of Nagore is the Dargah, dedicated to the 16th-century saint Hazarat Meeran Sultan Syed Shahabdul Hameed.

Exhibiting huge doors covered with embroidered silver sheets, five spires, impressive carvings, and lavish marble interiors, the Dargah is a stunning architectural treat. The annual Kandoori Festival held here attracts people of all faiths. In addition to Dargah, Nagore also houses two ancient Hindu temples, one of which is dedicated to Lord Shiva and the other to Lord Vishnu.

Nicknamed the ‘Manchester Of South India’, Coimbatore is not only famous for its textile industry, but also its beautiful temples which makes it a prominent pilgrimage site in Tamilnadu. The fascinating religious beliefs and stupendous architecture of these temples beckon you to visit them and peep into the rich culture of Coimbatore.

At the foothills of the Velliangiri Mountains, the Isha Yoga Center in Coimbatore is one of the remarkable spiritual centre in the entire South India. The huge and mesmerizing Adiyogi Shiva Statue steal the heart and glance of every onlooker. Recognized as the “World’s Largest Bust Sculpture” by the Guinness World Records, this magnificent statue is about 34.3-meters tall (112.4 ft), 45 meters long (147 ft) and 7.62 meters wide (24.99 ft). With the lush Velliangiri mountains of Coimbatore as the backdrop, this is the perfect place for spiritual thirst.

The divine bliss and positive energy that emits in the place is so overpowering making it a must-visit especially during Mahashivratri.

Now, you have the list of Best Religious Places/Pilgrimage Sites in Tamilnadu with which you can plan a spiritual sojourn to the revered holy destinations of the state. These religious places in Tamilnadu are sure to drench your soul in the essence of everything holy and divine.

If you think there’s something we missed out, let us know in the comments below!

Feel free to visit www.tamilnadutourism.com now and make an online chat with our holiday experts to make your own customized tour packages at the best prices.