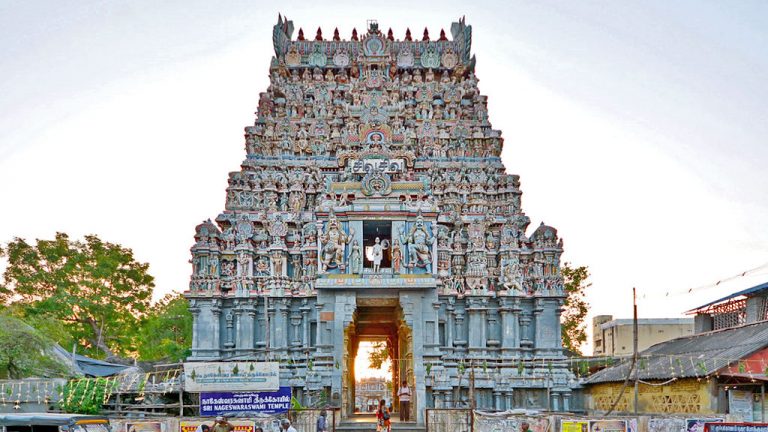 Temples always promises a peaceful place full of divine energy and creates an aura of spirituality where one can feel the presence of God. Visiting a temple enriches one’s soul with love, energy, and radiance of the God almighty and brings a ray of hope and fills body, mind, and soul with a wave of inner peace.

The “Land of Temples” – Tamilnadu reverberate with an overwhelming divine energy that draws thousands of pilgrims throughout the year. Myriads of temples with sky-scraping towers dot the skyline of this incredible ‘Temple City of India‘, Tamilnadu making it a spiritually sacred place to visit. Those who believe in astrology and the influence of planets over individual destiny also find Tamilnadu as an exceptional destination of worship. Do you know why? Tamilnadu owns a cluster of nine temples known as Navagraha Temples, dedicated to the nine celestial planets – Navagrahas – according to Hindu astronomy where one can offer prayers to the nine planets.

It is believed that a pilgrimage tour to the Navagraha Temples and offering prayers to the nine planets assure benefits in eliminating evil effects of the planets on the person’s life, strengthens the planetary influences for prosperity, and also believed to weaken the bad effects of the planets on the well-being of the person. These nine planetary Gods of the Hindu Astronomy include Surya (Sun), Chandra (Moon), Angarakan (Mars), Budha (Mercury), Guru (Jupiter), Shukra (Venus), Shani (Saturn), Rahu (the ascending node of Chandra) and Ketu (descending node of Chandra). Each Navagraha Temple in Tamilnadu is devoted to one of these planets.

Know the Legend Behind Navagraha Temples:

Legend has it that when Sage Kalava was suffering from serious ailments along with leprosy, he prayed to the nine planet deities, Navagrahas for a cure. Being pleased by his devotion, the planet deities offered him cure. However, Lord Brahma (the Hindu god of creation) who was extremely angered with this as he felt that the planets have no powers to provide boons to humans, cursed the nine planets with leprosy and were banished to earth in a place called Vellurukku Vanam, the white wildflower jungle, the modern Suryanar Kovil in Kumbakonam, Tamilnadu. The planets prayed to Lord Shiva to relieve them from Brahma’s curse. Lord Shiva who was impressed by their prayer appeared in front of them and assured that the place Vellurukku Vanam belonged to them and tasked them to grace the devotees worshipping them from the place.

The cluster of nine temples known as Navagrahasthalam is located in Kumbakonam, Tamilnadu. All eight temples are dedicated to Lord Shiva with the grahas (planets) serving as the secondary deities while the Suryanar Temple is dedicated to the Sun God and the other Navagrahas.

Now, let’s take a look at the Navagraha Temples in Tamilnadu:

Built during 1100 A.D. by Chola king Kulothunga I, Suryanar Kovil is dedicated to the Sun God, Lord Suryan. Located in the village of Suryanarkoil in the Thanjavur district of Tamilnadu, it is the only temple in the state which has all 9 shrines of Navagraha. The presiding deity, Lord Suryan presides here with his consorts Usha Devi and Pratyusha Devi. The Suryanar Kovil looks great in its Dravidian architectural style with 5-tiered raja gopuram, a gateway tower and a granite wall that encloses all the shrines of the temple. Pongal is the main festival celebrated here with great pomp and fervor which is celebrated as a thanksgiving to Lord Suryan.

The Kailasanathar Temple located in Thingaloor, Tamilnadu is a Chandra Navagrahasthalam, dedicated to the Moon God, Lord Chandra. Hence, devotees believed that those who have Chandra Dosha are sure to get relief from their pain and suffering by offering prayers at Kailasanathar Temple. Like other Navagraha Temples in Tamilnadu, Kailasanathar Temple is also a Shiva Sthalam where Kailasanathar (Lord Shiva) and Goddess Periyanakiamman (Goddess Parvati) are the main deities worshipped here. The temple reflects beautiful Dravidian style architecture adorned with stunning carved decorations. Kailasanathar Temple houses a huge Nandi statue and a 16-sided Shiva lingam made out of black granite. The most striking feature of Kailasanathar Temple is that during the months of Puratasi (September – October) and Panguni (March – April), the gorgeous rays of the moon fall on the Shiva Lingam.

Vaitheeswaran Kovil is associated with planet Mars or Angaraka or Mangal and hence considered as Angarakan Navagrahasthalam. Like other Navagraha Temples, Lord Shiva, and Goddess Parvati as Thaiyalnaayaki are the main deities here. Lord Shiva is worshipped as Vaitheeswaran or the “God of healing” at this temple and it is believed that prayers to Vaitheeswaran can cure all ailments. A holy dip in the holy waters of the temple tank of Vaitheeswaran Kovil is believed to cure leprosy. The Temple houses a bronze image of Angaraka (Planet Mars) and is worshipped with immense devotion, seeking a cure from illness. Every Tuesday, the image of Angaraka is taken out in a procession as it is considered an auspicious day to worship Mangal. It is believed that the Vaitheeswaran Kovil is built on the exact spot where Lord Ram, his brother Laxman and the Saptarishis are said to have performed their meditation.  The Temple is also known as Thirupullirukku Velur.

Dedicated to Lord Shukra or planet Venus, Kanjanoor Agneeswarar Temple is one of the Navagraha Temples in Tamil Nadu, also known as Shukra Navagrahasthalam. The presiding deity of this temple is Lord Shiva worshipped as Agneeswarar and Goddess Parvathi as Karpagavalli Amman. There is no separate shrine for the Navagraha, Shukra here as Lord Shiva Himself is worshipped as Shukra at this temple. Unlike other Navagraha temples in Tamilnadu, here the presiding deity, Agneeswarar in the form of lingam depicts Lord Shukra. An interesting feature is that the Linga of Agneeswarar in Kanjanoor Agneeswarar Temple absorbs all the oil poured on it during the process of Abhishekam. Lord Shukra or planet Venus is believed to resolve problems related to love, marriage, beauty, and comforts and is mostly worshipped by men for the wellbeing of their wives.

Sri Naganathaswamy Temple in Thirunageswaram, dedicated to Lord Rahu is one of the popular Navagraha temples in Tamil Nadu. Here, the presiding deity is Lord Shiva, worshipped as Lord Naganathaswamy and his consort Giri Gujambika and are enshrined with Goddess Lakshmi and Goddess Saraswati. Rahu Bhagavan is also worshipped here along with his consorts Nagakanni and Nagavalli. Sri Naganathaswamy Temple attracts devotees who want to get relieved of Naga Dosha as it is believed to be the place where serpents Adi Sesha, Kaarkotakan and Dakshan worshipped Lord Shiva and got relieved from their curse. One of the unique features of Sri Naganathaswamy Temple is that Lord Rahu is seen with a human face while in other places, Lord Rahu is usually seen with a serpent face. Another most striking feature of this temple is that when the milk is poured over the idol of Lord Rahu during milk Abhishekam, it turns blue which is clearly visible.

The Naganatha Swamy Temple located in the village of Keezhperumpallam is considered as Ketu Navagrahasthalam and is dedicated to Ketu or the shadow planet, Mercury. The primary deity is Lord Shiva in the form of Naganatha Swamy with his consort Soundaryanaki. Here Ketu is enshrined with the body of an asura and head of a snake.

According to the Legends, Rahu (an asura) with the help of Sukrachariyar, took the form of a deva and consumed the nectar (amirtham) emerged after churning of the Milky Ocean (Paarkadal) by the devas and the asuras, which Lord Vishnu in the guise of Mohini was distributing only to the devas. Suryan and Chandran who had spotted this incident complained it to Lord Narayana. Lord Narayana in anger hit Rahu on his head with a spoon. And his head was cut off and fell on the ground. However, because he had consumed nectar (amirtham), his body and head continued to live. The body of a snake got attached to Rahu’s head and thus, become Ketu. Hence, Kethu Bhagwan appears with the body in divine form, possessing a head as a five-headed snake with folded hands worshipping Lord Shiva.

3 thoughts on “NAVAGRAHA TEMPLES IN TAMILNADU”