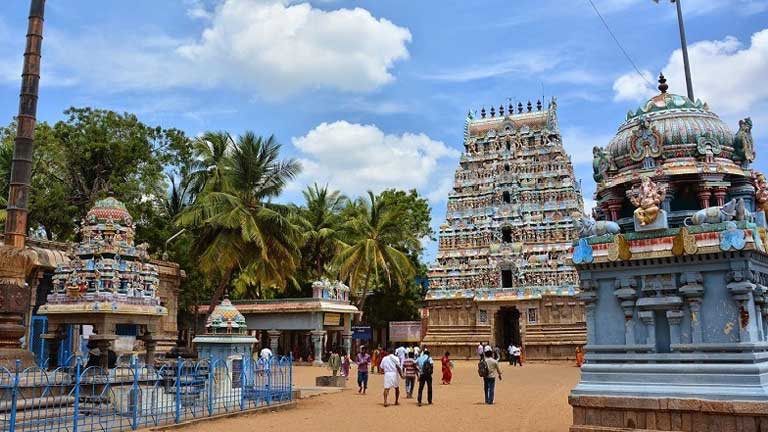 Do you know Why It Is Good To Visit Rahu Stalam, Sri Naganathaswamy Temple, Thirunageswaram in Tamilnadu? Then check out the following blog:

Visiting Rahu Stalam, Sri Naganathaswamy Temple, Thirunageswaram in Tamilnadu, dedicated to Rahu Bhagavan is considered very auspicious to diminish the malefic effect of Rahu. Rahu Bhagwan is believed to be the cause for one’s good position, business, status, winning over opposition, faithfulness, to travel overseas, and for mantra power.   As per the ancient science of Astrology, Rahu is considered a shadow planet which means it has no real physical existence. Anyhow, its malefic influence is very powerful, and its presence is said to make the lives of natives burdensome. It is believed that the presence of Rahu in one’s horoscope signifies karma bondage coming down from their previous births. Puthira Dosham, Kalathra Dosham, Sarpa Dosham, mental disorders, communicable diseases, leprosy, delay in getting married, childlessness, troublesome married life, fall in grace are caused by Rahu Dosham.

Praying to Rahu Bhagavan at this Rahu Stalam helps to rid a person from these Doshams and also saves the person from all poisonous life forms. Hence, devotees who are badly affected by Rahu can be seen flocking Sri Naganathaswamy Temple to offer prayers and seek the blessings of Rahu Bhagavan.

Sri Naganathaswamy Temple is believed to be the place where Nandi attained the status of Nandeeshwara after worshipping Lord Shiva. Also, this is the place where Vinayakar attained the status of Ganapathi or the Head of the Ganas. It is also said that the King of Devas, Indira was relieved of the bad smell emanating from his body by worshipping Goddess Giri Gujambika at this temple with a scented material named Punugu for 45 days. A lot of devotees flocks to Sri Naganathaswamy Temple, seeking relief from Naga Dosha as it is said to be the place where serpents Adi Sesha, Dakshan, and Kaarkotakan worshipped Lord Shiva and got relieved from their curse. As Sri Naganathaswamy Temple is revered in Tevaram, it is categorized as Paadal Petra Sthalam, one among the 275 temples that find mention in the Saiva canon.

Devas and Asuras churned the Paarkadal to obtain Amrutham (nectar) on the belief that it would free them from death, keeping them alive forever. Legend says that Lord Vishnu in the guise of Mohini distributed the Amrutham only to the devas. Realizing that the nectar may get over and the asuras will not get it, one of the asuras took the form of a deva, with the help of the asura guru Sukrachariyar consumed the nectar. Surya and Chandra noticed this, and they complained to Lord Vishnu. In anger, Lord Vishnu cut the Asura’s body into two with his chakrayudham (discus) and they fell on the ground.

Since the asura had consumed Amrutham, his head and body continued to live in such a way that his head joined with a snake’s body to become Rahu Bhagavan while his body joined with the head of a snake to became Kethu Bhagavan.

But Rahu who did not pardon Surya and Chandra takes his revenge on them whenever he gets a chance by devouring them. And this phenomenon is commonly known as the eclipse.

Pay a visit to Thirunageswaram Sri Naganathaswamy Temple on your next trip to Tamilnadu and seek the blessings of Rahu Bhagavan and get relief from all your Rahu Doshas.