REASON TO VISIT SURYANAR KOVIL NEAR KUMBAKONAM IN TAMILNADU 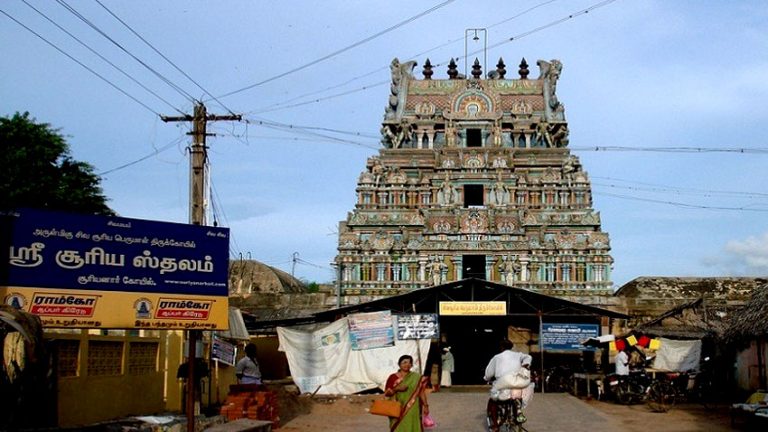 REASON TO VISIT SURYANAR KOVIL NEAR KUMBAKONAM IN TAMILNADU

The concept of worshipping the Sun is one nearly as old as mankind itself. Being one of the most conspicuous and powerful entities in the physical world, the Sun has naturally drawn the attention and gained the admiration of many races, who have incarnated and worshipped it as a god. Hence, Sun became the dominant figure among all ancient civilizations, from Babylon to India, China, South America, Africa, Greece, Rome, Mexico, Egypt, and Europe.

The Sun God, Surya or Aditya occupies an illustrious place in Hinduism. He is regarded as the supreme soul and source of all life who brings light and warmth to the world. Sun has been revered since Vedic age with many hymns describing it as the source and sustainer of all life on earth. There are references to sun worship found in the Puranas too. The Sun even had a vital role in the epic Mahabharata as the father of Karna.

Having been recognized in various scriptures across time, the Sun and the Sun God is greatly admired in India. It is believed that the Sun God is the bestower of good health, success, and prosperity. And worshipping Him cures ailments like leprosy, blindness, skin diseases, etc; and assure benefits in eliminating evil effects of the planets in one’s life. Quite a few temples are there in India constructed with Sun as the chief deity. Suryanar Kovil near Kumbakonam in Tamilnadu is one of the few historic temples in India dedicated to Sun God.

In this blog, we will discuss the Reason to visit Suryanar Kovil in Tamilnadu:

Dedicated to Sun God – Suryan, Suryanar Kovil is one among the nine revered Navagraha Temples in Tamil Nadu. Pilgrimage to Navagraha Temples is believed to assure benefits on one’s health, financial situation, professional growth and also wipes off all the obstacles prevailing in one’s horoscope. Also, Suryanar Kovil is the only temple in Tamil Nadu which has separate shrines for all the planetary deities Sun (Surya), Moon (Chandra), Mars (Angarakan), Mercury (Budha), Jupiter (Guru), Venus (Shukra), Saturn (Shani), the ascending node of Chandra (Rahu) and the descending node of Chandra (Ketu). The presiding deity of Suryanar Kovil is Suryanar who presides here with his consorts Usha Devi and Pratyusha Devi.

In mythology, it is stated that Sage Kalava Muni was diagnoses with severe Leprosy. He prayed to Navagrahas (nine planets) begging total cure. All the planets, pleased by his devotion, granted his wish – the cure from leprosy. However, the creator, Lord Brahma got furious about the Navagrahas providing the boon to humans as he felt that the planets had no right to change the destiny of a person. So, Lord Brahma cursed all the nine planets to undergo what Sage Kalava Muni was destined to, and hence the Navagrahas were affected by leprosy. They were sent down to earth in a place called Vellurukku Vanam, the white wildflower jungle where they performed severe penance to please Lord Shiva to relieve them of the curse. Lord Shiva was so pleased with their penance that he appeared before the Navagrahas and blessed them to grace the devotees worshipping them enduring a variety of hardships. Vellurukku Vanam, the white wildflower jungle which is mentioned in the legend is where the Suryanar Kovil now stands.

As per the inscriptions found in the temple, Suryanar Kovil was believed to have built during the reign of Kulothunga Choladeva (1060-1118 CE) in the 11th century. Suryanar Temple was known as Kulottungachola-Marttandalaya in those times. The King has had a good relationship with the Gahadwal dynasty of Kanauj whose rulers were ardent devotees of Son God. Hence, Suryanar Kovil is deemed to be a manifestation of their influence in South India. Later, the temple was extensively renovated by the Vijayanagara Empire. Suryanar Kovil is now maintained and administered by the Hindu Religious and Charitable Endowments Department of the Government of Tamil Nadu. Suryanar Kovil also finds a mention in the song composed by Muthuswami Dikshitar which starts with “Suryamurthe” in Saurashatra Ragam.

Old yet very powerful, Suryanar Kovil is a famous ‘Parihara Stalam’. Devotees throng the Suryanar Kovil to submit their prayers to the Sun God and the Navagrahas to protect them from the adverse planetary effects in their life. The temple is revered for its pujas which are believed can cure malefic effects of Saturn (Shani), helps in good education and career goals, reduces hurdles in marriage, and removes Putra Dosha etc.

Lighting ghee lamps and taking bath in the temple tank for 12 Sundays is believed to ward off evils and provide relief from Navagraha doshas including Pitru Dosha, Putra Dosha, Kaalasarpa Dosha, Problems with eyesight and heart, and also the delays and obstacles in marriages. Red lotus, wheat, red cloth, erukku (Madar Plant) and sweet Pongal are some of the offerings of the Lord at Suryanar Kovil. The devotees regularly perform Nadi Pariharam, Navagraha Homas and Surya Archana at this temple. Devotees also perform Thulabharam by offering wheat, jaggery and harvested grains to the Lord, equivalent to their weight to perform. Suryanar Kovil is a boon for childless couples where devotees believe that childless couples will be blessed with children by offering prayers and tying up cradles at the temple. Another significant feature is that devotees visiting Suryanar Temple have to follow an elaborate worship protocol, one has to first visit Lord Vinayaka (Lord Ganesha) and then the Sun God and after that the 8 Navagrahas and to finish it with visiting Lord Vinayaka again, circumambulating the temple nine times.

Suryanar Kovil is an architectural splendour that majestically stands with the prestige of its antiquity, architectural, and spiritual glory. Reflecting the exquisite traditional Dravidian style of architecture, it is one of the most appealing and well-constructed worship places in India. Suryanar Kovil boasts of a five-tiered gopuram, a grand gateway tower and magnificent granite walls enclosing all the shrines within the premises.

10-day Ratha Saptami is the major festival celebrated at Suryanar Kovil. It is observed every year in the Thai month that often falls between January and February. Ratha Saptami marks the change of season to spring and the start of the harvest season. It is said that the Sun God turns his Ratha (Chariot) drawn by seven horses towards the northern hemisphere in a north-easterly direction with Aruna as the charioteer. This day is celebrated as Ratha Saptami.

Special pujas and Abhishekam are performed to the Sun God on the first day of each Tamil month, as He heads the zodiac family.

The Temple also celebrates Pongal with great pomp and fervor as a thanksgiving to the Sun God, Lord Suryan.

Suryanar Kovil is a great place of worship where devotees go to rectify the faults in their planets. A must-visit temple on your trip to Kumbakonam, Tamilnadu. Have a blissful darshan at Suryanar Kovil in Tamilnadu. May the Lord give relief from all your hardships in life and blesses you.