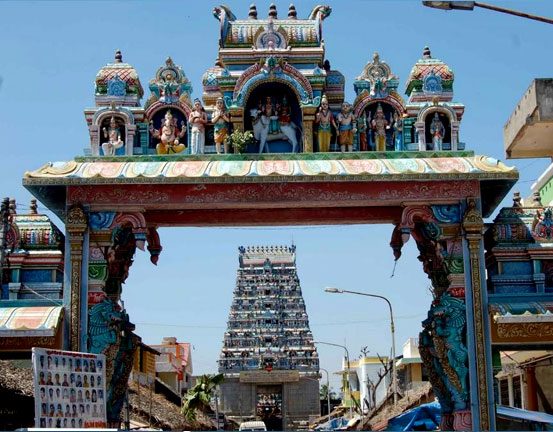 Check out the History Of The Famous Thirunallar Saniswaran Temple:

Legends says that the legendary King Nala was relieved of his afflictions caused by the malefic influence of Planet Saturn or due to Shani Dosha, after worshipping at Thirunallar Saniswaran Temple and taking a holy dip in the temple tank. The sacred temple tank is named Nalan Theertham and it is believed that by bathing here, one wash off all kinds of afflictions and misfortunes caused by one’s past karmas.

According to history, in the 7th century C.E. when Jainism was spreading in influence in South India, the Pandian King Ninra-seer-Nedumaran who was ruling Madurai was converted to Jainism. Soon, everyone in the Pandian Kingdom embraced Jainism, forsaking the old religion except the Queen Mangaiyarkarasi and Minister Kulacchirai Nayanar who were staunch Saivites. Distressed with this, the Queen and the Minister were yearning to reclaim both the King and the Kingdom back into the fold of their traditional religion, Saivism.

At that time, there came the news of the camping of a young Saivite saint Tirugnana Sambandar at Vedaranyam. The Queen and the Minister heard the miracles performed by the young saint in the Tanjavur district that they sent an urgent invitation to him to visit Madurai and free the King and his subjects from the clutches of Jainism. The arrival of the Saivite saint provoked the Jains that they set fire to his holy dwelling. But by his yogic powers, Saint Sambandar had the heat transferred to the King Ninra-seer-Nedumaran, who as a result suffered in agony.

As per Queen’s request, Saint Sambandar sang the Padigam ‘Mandiramavadu Neeru’ and sprinkled a few grains of sacred ash on the right side of the King’s body to relieve the pain. The Jains who did not like the act of the saint, in turn, chanted the Aruga Mantra (Jain Mantra) and stroked the left side of the King’s body with peacock feathers, but it only aggravated his pain. The saint applied a few more grains of the holy ash to the King’s left side, in response to entreaties by the King and his ministers. The King who was suffering from severe pain soon was free from his burns after the saint applied the holy ash on his body.

This annoyed the Jains that they further challenged the Saint Sambandar, asking to consign to flames the Mantras of both religions, written on palm leaves to see which one survived the trial and tribulation of fire, thereby showing superiority over the other. The Jains first placed their palm leaf onto the fire but very soon it was consumed by the flames. Next, Saint Sambandar place one leaf containing the forty-ninth Padigam of the Tevaram hymn that was sung at the Thirunallar Temple of Lord Darbharanyeswaran (Lord Shiva) on the flames. To all of their surprise, the palm leaf remained untouched by the flames and retained its evergreen freshness. Thus, Saivism was reestablished as the true religion in the Pandian capital. And this legend depicts the glory of the Thirunallar Temple.

The greatness of the Thirunallar Saniswaran Temple is that offering prayers at this temple are believed to reduce the malefic effects of planet Saturn or the Shani Dosha as well as increases the positive effects of Saturn thereby help people benefit from great difficulties, challenges, and limitations. For over a thousand years, devotees visiting Thirunallar Saniswaran Temple have found their misfortunes and bad luck to decrease as this is the only temple in the world where Lord Shani lost all his power to Lord Shiva. The holy tank named Nalan Theertham of this temple possesses healing powers literally and metaphorically. And devotees strongly believe that a holy dip in the sacred waters of Nalan Theertham washes off all kinds of afflictions and misfortunes caused by their past karmas.

On the belief that they can get rid of their curses and spells of bad luck, devotees light holy lamps with gingelly oil and offer prayer to Lord Saniswaran at Thirunallar Saniswaran Temple. After prayers, devotees offer balls of cooked rice to the Crow, which is considered the mount of Saniswaran. Devotees apply Gingelly oil on the head and take a bath in the holy theertham and then visit the nearby Kali Theertha Vinayakar shrine to offer prayers as well as break coconuts.

Thirunallar Saniswaran Temple is considered one of the ‘Saptha Vidanga Sthalams’. Each idol or Murti in these seven temples has the Lord representing a unique dance form. The processional deity or Somaskandhar of Thirunallar Saniswaran Temple is ‘Naka Vidangar’ and the unique dance he performs here is ‘Unmatha Nadanam’. Hence the place is also known as ‘Nakavidangapuram’.

Pay a visit to Thirunallar Saniswaran Temple on your next trip to Tamilnadu and seek the blessings of the Lord and get relief from all your Shani Dosha.