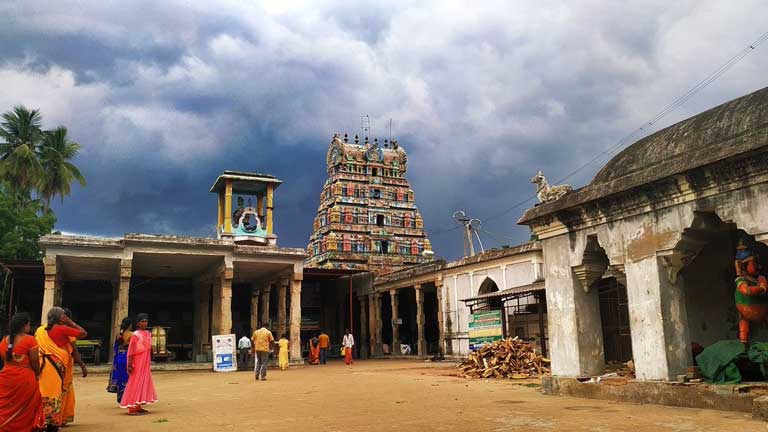 Following are some of the Things to Know About Kanjanoor Agneeswarar Temple. Let’s check out:

GREATNESS OF KANJANOOR AGNEESWARAR TEMPLE:Kanjanoor Agneeswarar Temple is a famous “Parihara Sthalam” for those suffering from the adverse effects of Planet Shukra. Planet Shukra is regarded as the second most beneficial planet after Guru (Planet Jupiter). Hence, devotees believe that worshipping Lord Shiva who represents Lord Shukra here will bless them with wealth and prosperity. Those seeking a cure for diseases like anemia and mental disorder can also worship Lord Shiva here.

If Shukra is well-placed in one’s horoscope, the person will be blessed with wealth, prosperity, fame, marriage, beautiful wife, own house, vehicles, and even have chances to govern the state/ country and hold influential status. But an unfavorably placed Shukra in one’s horoscope causes skin problems, eye ailments, loss of appetite, indigestion, etc. Visiting Kanjanoor Agneeswarar Temple and offering a white lotus, white cloth, athi (fig), and mochai Kottai (common bean) to Lord Shukra is believed to alleviate problems caused by Shukra Dosha. Fridays are regarded as the most auspicious day of Lord Shukra. Hence worshipping Lord Shukra on Friday is considered very special.

There are numerous legends associated with Kanjanoor Agneeswarar Temple. Butthe most famous one is about Haradatta. Haradatta was born in Kanjanoor in a staunch Vaishnava family and was named Sudarsana during his birth.

Despite being born to a Vaishnava family, Sudarsana became an ardent devotee of Lord Shiva. Not happy with Surdasana’s devotion to Lord Shiva, His father Vasudeva, and the villagers tried to convince him of the superiority of Vaishnavism. Regardless, nothing moved Sudarsana from his devotion to Lord Shiva and he used to visit Kanjanoor Agneeswarar Temple despite the fierce opposition from everyone. His father then banished him from his house. But Sudarsana went to Kanjanoor Agneeswarar Temple and slept there. Pleased with his devotion, Lord Shiva appeared before Sudarsana as Dakshinamurthy and initiated teachings of Shaivism. He also named Sudarsana as Haradatta Sivachariyar.

After attaining knowledge, Haradatta took a purificatory bath in the river Cauvery and went to his house and invited his father as well as the villagers for a debate. The villagers didn’t accept his debate and planned to kill him. Hence, they asked him to prove his devotion to Lord Shiva by standing on a heated iron tripod at Varadaraja Perumal Temple.

Accepted their challenge, Haradatta stood on the heated iron tripod and courageously proclaimed that “Lord Shiva is the supreme deity and the life force behind everything on this earth”. His passionate and zealous devotion made Lord Shiva and his consort Goddess Karpagambal to appear before him and they blessed him. The villagers were also enamored by Haradatta ’s devotion to Lord Shiva that even some of them got converted to Shaivism.

Pay a visit to Kanjanoor Agneeswarar Temple on your next trip to Tamilnadu and seek the blessings of the Lord.