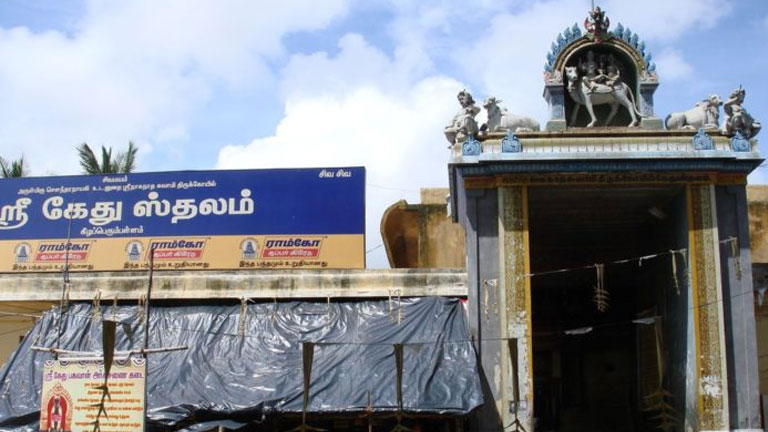 Keezhperumpallam Naganatha Swamy Temple in Kumbakonam is the renowned Ketu Navagrahasthalam, dedicated to Kethu, the shadow planet. Here, the presiding deities are Lord Shiva and his consort Goddess Parvathi who are worshipped as Naganatha Swamy and Soundaryanaki. Kethu Bhagavan enshrined here has the head of a five-headed serpent and the body of an asura. It is believed that Kethu worshipped Lord Shiva at this temple to get rid of his sins. Hence, he is seen here worshipping Naganatha Swamy with folded hands. One of the nine Navagraha Temples in Tamilnadu, Keezhperumpallam Naganatha Swamy Temple is a part of the popular Navagraha pilgrimage in the state.

THE SPIRITUALITY OF KETHU STHALAM TEMPLE KEEZHPERUMPALLAM TEMPLE AT KUMBAKONAM:

Keezhperumpallam Naganatha Swamy Temple is the well-known ‘Parihara Sthalam‘ to get rid of the Kethu Dosham. Devotees believe that certain malefic effects caused by Kethu such as Naga Dosham, Kethu Dosham, marriage obstacles, childlessness, property disputes, lack of property, defects of the former birth, are redressed when they offer prayers at Keezhperumpallam Naganatha Swamy Temple.

Kethu is associated with the Fish Incarnation(Meena Avatar) of Lord Vishnu and a fearless planet doing all good for the devotees belonging to his Rasi. Ketu Bhagavan grants good health and wealth to his devotees and brings prosperity to their family. He also bestows his devotees with children, fame, gain in property, vehicle, eyesight etc. Also, Kethu is deemed as the lord of three nakshatras – Ashvini, Magha and Mula. But Kethu can be more destructive if it is inauspiciously placed in one’s horoscope. Kethu destroys the dominance of the planet with which it is associated, making the planet behave in an unmanageable manner. Hence, people afflicted by Kethu are stricken with the loss of property, ill health, poverty, lack of progeny, marriage obstacles, fears of dacoity, poisonous bites, evil spirits, etc.

One can get rid of these afflictions, by worshipping Kethu Bhagavan at Keezhperumpallam Naganatha Swamy Temple. Devotees light seven deepam, Kollu Sadham (horse gram rice)– as nivedhana, drape Kethu Bhagavan with multi-colored cloths and worship him with red Lilly flowers. It is also suggested that reciting Kethu Moola Manthra and Kethu Gayathri Manthra after sunset facing North-West direction helps to alleviate the malefic effect of Kethu and benefit from his benevolence.

The history of Keezhperumpallam Naganatha Swamy Temple is associated with the legend of the churning of Paarkadal, the milky ocean. Legend says that when Devas and Asuras churned the Paarkadal with Manthira Mountain as the churning stick and Serpent King Vasuki as the rope, Amrutham (nectar) emerged which they believe will free them from death, keeping them alive forever. While Lord Vishnu in the guise of Mohini was distributing the Amrutham only to the devas, an asura disguised himself as a Deva and consumed it. This was informed to Lord Vishnu by Suryan and Chandran. Hence, Lord Vishnu in anger hit the asura on his head with the spoon in his hand. Then, his head was cut off and fell to the ground. However, as the asura had consumed Amrutham, his body and head continued to live. It is said that the head portion of asura attached itself to the body of a snake and became Rahu Bhagavan. And his body got attached to the head of the snake to become Kethu Bhagavan. Hence, Kethu Bhagavan at Keezhperumpallam Naganatha Swamy Temple comes with the body in divine form, possessing the head of a five-headed snake with folded hands worshipping Lord Shiva.

Pay a visit to Keezhperumpallam Naganatha Swamy Temple on your next trip to Tamilnadu and seek the blessings of Kethu Bhagavan and get relief from all your Kethu Doshas.