Popular places to visit in Tamilnadu for Jallikattu? 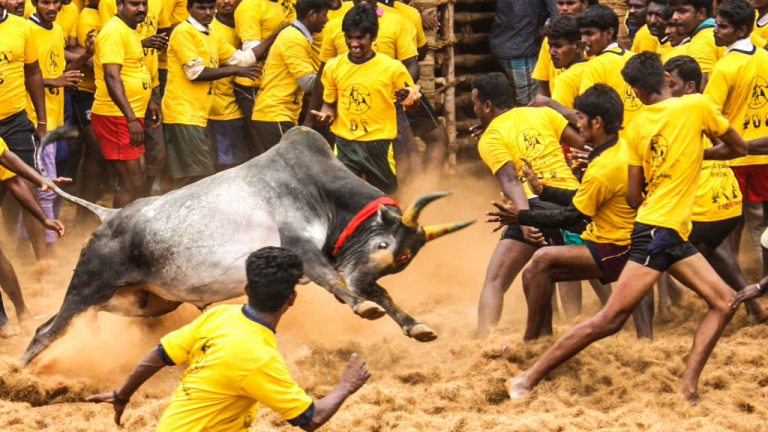 Popular places to visit in Tamilnadu for Jallikattu?

Tamil Nadu is most popular in the global forum for many reasons. Few of them include the magnificent temples, tangy cuisines across various regions and most importantly the festivals celebrated for every season. From the row of festivals, we are discussing about the most renowned warrior sport, which is indeed a pride of Tamil Nadu, in this blog.

Jallikattu, the most inevitable annual event in the down south of Tamilnadu deserves a discussion here. Pongal, the iconic festival of Tamil Nadu is very significant in two aspects. The prime partners of an agrarian family in Tamil Nadu are the cosmic elements essential for agriculture and the Bulls, vital in farming processes. Pongal falls during mid-january of every year and in 2021, it is on 14th January, Thursday.

The four days’ festival celebrated as a Thanks giving occasion to Sun God and the Bulls, the occasions of significance during Pongal. Pongal is otherwise called as Harvest Festival, celebrated across Tamil Nadu and diasporic Tamil Society dotted across the globe.

Bogi, Pongal, Maatu Pongal and Kanum Pongal are the four days in a row vibrant and colourful during Pongal festival. The first and second day are spiritually inclined worshipping nature and Sun god, offering them special poojas and rituals and relishing tasty delicacies.

Third day is the Maatu Pongal, worshipping Bulls, which have been vital in agriculture. The bulls in agrarian families are decorated gorgeously with colourful ribbons tied to their horns. Special poojas are offered to the bulls as a gesture of thanking them for their physical contribution to farming in their fields throughout the period. Following the poojas is the special event called Jallikattu, a warrior sport in existence since time immemorial in Tamil society. Historians record the references from the classical Sangam age hymns talking about this wonderful event, depicting the excellent emotional bonding between man and animal.

In fact, the warrior sport Jallikattu was more eventfully participated by women to choose their husbands and the winners of the sport were entitled to be the grooms. Hence, this was a social event reinstating the relationship among families and friends in the most beautiful way. Jallikattu was aesthetically named as “Yeru Thazhuvudhal” in ancient times, meaning hugging the bull, of course with lots of care and affection. Till the time of Nayak Dynasty, the sport was called Yeru Thazhuvudhal officially as well.

The term Jallikattu comes from the term “Salli” and “kaasu” referring to the gift pouches tied to the horns of the bulls as the prize money. The sport involves a furious bull rushing out of  a closed space called Vadivasal and the young men around trying to hold the bull’s hump without harming it. After Nayak dynasty took over to host the festival, it was termed as Jallikattu. Usually the majestic Kangeyam bull is involved in this game, as they are naturally more ferocious and muscular than any other of its species.

Do you know the Famous Jallikattu locations in Tamil Nadu include:

The festival Jallikattu, native to Tamil Nadu is popularly celebrated in the following locations.

Jallikattu is unique, vibrant and colourful in all these locatins. Generally , the location for the sport is a large open ground, with thousands of onlookers in the galleries. It will be a thrilling experience to watch the ferocious bulls coming out from Vadivasal. The warriors will try to catch hold of the bull’s hump and need to withstand for 45 seconds without being thrown down by the Bull. They also need to catch hold of the gift pouches tied to bull’s horns without harming it. The audience will feel the adrenaline rushing down their spines while watching the entire game.

There is a common opinion that Jallikattu is similar to European Bullfighting. But, in realty, both sports are completely different. Indeed, Jallikattu is loaded against the matadors, but it is not so in  European bullfighting. To describe it further, the bull’s horns are sharpened and the matador cannot use any weapons, which is the primary protocols to be adhered to by every warrior entering the ground.

Out of all the locations listed above, Alanganallur is world renowned for Jallikattu witnessed by thousands of people in and around and also tourists from across the globe.

Jallikattu has a very long history dating back to Sangam Age, described in the anthologies like Kalithogai and Natrinai. In addition, you can find several rock paintings assessed to be more than 3,500 years old, located at a remote vilalge  Karikkiyur illustrating how men were chasing bulls. Kaikkiyur is at a distance of 40 km from Kotagiri, a popular tourist destination in Nilgiri Blue Mountain Ranges, reported to have the biggest rock art site in south India. The Site includes more than 500 rock paintings, visiting them itself is a delightful experience. Another single painting dating back to 1500 years was discovered in a cave at Kalluthu Mettupatti, situated about 35 km west of Madurai depicts a lone man trying to control a bull.

Jallikattu is an emotional connect between man and animal. Though the rapid urbanisation,  agriculture getting faded away in due course, the successive generations from agrarian families quitting their track and getting on to other fields may rise a fear that the above listed locations may turn to be nostalgic villages of Tamil Nadu, holding the relics of history and a tradition followed from time immemorial. But, in reality, people from abroad and diversified locations of the country assemble at their native villages to witness and partake in Jallikattu, which has strongly bonded the youth with the deep roots of their viallges, and the legacy is passed through generations.

Plan a visit to the vibrant locations of Tamil Nadu, where the Sangam Age traditions are still alive.

Relive the history, in the process, Rediscover yourseslf !