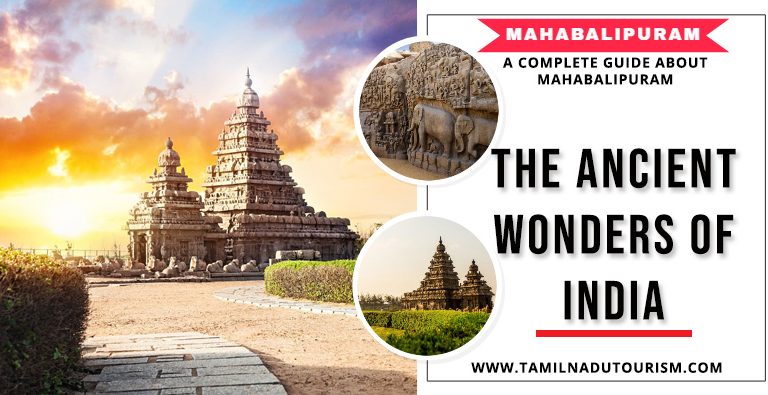 The Ancient Wonders of India

India is an amazing country for exploring with extraordinary beauty, deep-rooted cultural heritage, rich history, and varied religious beliefs, complemented by a vast population that is friendly and welcoming. It is the 7th largest country in the world which is gifted with 29 states and its culture and tradition vary from one state to another. Further, architectural diversity is its greatest pride. The “Temple City of India“, Tamil Nadu, exposes you to some of the excellent pieces of architecture.

The countless breathtaking architectural marvels you come across in Tamil Nadu are the priceless contributions of various dynasties that ruled the region like Pallavas, Cholas, Pandya, Vijayanagar and the Nayaks. And Tamil Nadu has a history that dates back to as early as the Sangam Age. The numerous archaeological remains seen here are the proof of continuous human habitation in the region from 15,000 BCE to 10,000 BCE. Tamil Nadu also witnessed an era of colonization under the rule of European powers like the British, French, Danes, and Dutch.

The temple city of Mahabalipuram (also Mamallapuram) is situated just 60 km off Chennai on the Bay of Bengal coast in the south Indian state of Tamil Nadu. The city is well connected through a network of roads from Chennai and other important cities in South India.

The state of Tamil Nadu is home to nearly 33,000 skyscraping temples and stunning monuments enhanced with intricate architectural designs, a variety of sculptures, and rich inscriptions that belongs to the Dravidian times. Mahabalipuram, a historic place in Tamil Nadu, situated on the Coromandel Coast along the Bay of Bengal, showcases some of the most outstanding architectural wonders in the world. Find your way around the group of monuments at Mahabalipuram to amaze at the incredible craftsmanship of ancient India.

Mahabalipuram, also known as Mamallapuram is a renowned UNESCO World Heritage Site in Tamil Nadu, that surprises everyone with its intricately carved temples, rock-cut caves and monolithic structures. Served as the major seaport of the ancient Pallava kingdom, Mahabalipuram also flourished as a significant center of art, architecture and literature during their reign. The place is believed to have named after the Asura King Mahabali who was a kind and generous ruler. But later, as a tribute to the great achievement of the Pallava King Narasimha Varman I, who was a great wrestler with the title ‘Mamallan’, the place was renamed as Mamallapuram. And most of the monuments you find here are built during the reign of King Narasimha Varman I.

Mahabalipuram is also referred to as the “land of Seven Pagodas”. The mesmerizing setting filled with calmness and serenity and the alluring white sandy beaches is an added charm of Mahabalipuram amidst its spellbinding architectural marvels.

The history of Mahabalipuram is an intriguing one. Although its ancient history remains unclear, numismatics, temples and other sources of historical evidence suggest that it was a place of significance even before the temples were built. Some historical facts about Mahabalipuram are mentioned below:

What are you waiting for? The right time to visit this destination is just around the corner! Plan a trip soon with Tamilnadu Tourism.

Sculpture Architecture involves carving of small artworks and designs on the pillars, walls, doors, etc to ornament the architectural structures like buildings, temples, palaces, mausoleum, etc. Mahabalipuram is an exceptional place in India where you can admire glances of such mind-blowing sculpture architecture. The structures found here are an amazing manifestation of Pallava Architecture and they occupy a special place among the classical monuments of India. The most notable feature is that all the sculptures at Mahabalipuram are monolithic, which means regardless of small or big, every sculpture is carved from single rocks especially that of granite.

The old lighthouse is not in conventional shape like the other modern lighthouses. It again is a canvas for the then artisans who have left their work in the form of sculptures.

On reaching the top of this old lighthouse there is a sculpture called Dakshina Murthi which has a statue of Shiva inside. From the top of this lighthouse, entire Mahabalipuram town along the breathtaking view of Bay is visible on one side making it one of the must-visit places in Mahabalipuram. While from the other side of this lighthouse the nuclear power plant located in Kalpakkam is visible.

Group of Monuments at Mahabalipuram

Mahabalipuram constitutes a cluster of grand edifices which is unique and equally stunning as the other. As you step into the Mahabalipuram town, the whole ambience and the sight of visually stunning historic monuments make you feel like you are entering into the ancient Pallava Kingdom and it takes you back to the 7th century C.E when it was first constructed. And every visitor is left in a state of trance upon visiting this incredible location. The remarkable sets of monuments you will find here are:

As the name suggests, the Shore Temple is situated on the shores of Bay of Bengal and is placed in such a way that the first rays of the rising sun fall on the presiding deity of the temple, Lord Shiva. The Shore Temple consists of three shrines in which two are dedicated to Lord Shiva and the third one to Lord Vishnu. Build in the 7th-century C.E, the Shore Temple is among the oldest monument found in Mahabalipuram.

The roof or the shikhara of the temple looks like a pyramid. Monolithic sculptures of Nandi, Shiva’s vahana (vehicle) is found scattered around the temple complex. And the area around the Shore Temple is now maintained as a landscaped park.

This ginormous open-air bas-relief carved out of pink granite is also popular as the Descent of the Ganges. It constitutes life-size figures including a family of elephants and monkeys and measures 15 meters in height and 30 meters in width. It is believed that Arjuna, who was one of the Pandava brothers, did penance at this place to get the Celestial weapon Pasupastra from Lord Shiva.

Pancha Rathas is dedicated to the Five Pandava brothers of Mahabharata, Yudhishthira, Bheema, Arjuna, Nakula and Sahadeva. All the five Rathas are carved out of a single stone but each of them is unique from the other. Bas-reliefs and murals adorn the walls of these structures. There are beautiful sculptures of elephants and Nandi (bull) on the premises. You can also see another chariot named Draupadi Ratha here which is dedicated to their wife.

Another fascinating thing you will find here is Krishna’s Butterball. It is a giant natural rock, balancing on a slippery hillside that defies the laws of physics. It has been here for more than 1200 years and the formation of the rock is still unknown.

This temple is built by the Pallava King to safeguard the sculptures from the ocean and is dedicated to Lord Vishnu. And ever since the construction of the temple, the sculptures were not eroded by the ocean.

It is also known as Mahishamardini mandapa and is adorned with the carvings of Shiva and Parvati and Murugan.

Olakkanesvara Temple is placed just above the Mahishasuramardhini Cave, on a huge rock. Also known as the old lighthouse, the place offers a panoramic view of the  Bay of Bengal coastline.

Ethics And Its Connections to Sculpture:

Mahabalipuram and its group of monuments treat you with a lot of surprises. One such surprise that catches the attention of every visitor is the Krishna Mandapam. It is a cave temple dedicated to Lord Krishna which dates back to the mid-seventh century and is the largest among the rock-cut temples in Mahabalipuram. Also, it is the oldest cave temple in the region. Large pillars carved with horned lions beautify the entrance of the cave.

What steals the show at this marvelous location is the wonderful carvings of the various incidents of Lord Krishna’s life on the surface of the wall. The most spellbinding one is that of Lord Krishna, as a child saving the villagers from the outrage of Lord Indra, holding the Govardhana Hill on his little finger and all villagers and animals taking refuge under the hill, protecting themselves from the ceaseless rain. And this amazing sculpture portrays Lord Krishna as the protector of all living beings. It is believed that Lord Krishna stood standing for several days lifting the huge hill on his single little finger and the hill served as an umbrella protecting the villagers from the heavy downpour. Lord Indra felt embarrassed with the extraordinary act of the child that he withdrew the clouds.

Several other scenes from the Hindu mythology are also beautifully portrayed on the walls of this temple. Among them, the carvings of Lord Krishna in a joyous playful mood with his gopis (milkmaids) is an interesting one. There are frescoes of Krishna playing the flute in the fields. Most of the sculpture you find here throw light into rural bliss as well, where you can see the sculptures of village people and their cattle. The image of the cow licking her calf as she was being milked by a villager and the shepherdess carrying a pot of curd on her head at the same time holding her child’s hand, beautifully portrays the love and care of a mother to her child.

You can also see the image of a farmer carrying his child on his shoulder which displays how the people were concerned about their fellow beings. A woodcutter walking with an axe, a lady with a rolled mat on her head and a tier of arranged pots in one hand, a young couple and a standing bull are also in the scene and everyone is seeking shelter from the heavy rain. This theme from Hindu mythology which is amazingly pictured in the Krishna Mandapa is among the highest achievements of realistic art in Southern India.

A visit to Mahabalipuram is incomplete without exploring the India Seashell Museum, a unique marvel of Mahabalipuram. It is lauded as the biggest seashell museum in the whole of Asia and also the largest of its kind in India. Over 40000 unique seashells from all across the world adorn the 4 galleries of the museum.

Besides seashells, you will also get an opportunity to catch sight of shark teeth, whale fins and even fossils. The Museum is also home to a shopping centre where you can shop beautiful pearl jewellery and other interesting items made from sea products like oysters, conch shells, etc.

Home to UNESCO World Heritage Site, Mahabalipuram is a beautiful, serene town in the Indian state of Tamil Nadu. It is easily accessible by all modes of transportation.

Marked by the historical monuments and structures, Mahabalipuram takes you to a ride along the times of Pallavas. If you are a fan of history and archaeological edifices, Mahabalipuram is a must to add in your travel bucket list and is worth every minute spent here.

Book your Mahabalipuram Trip from Chennai with our Tamilnadu Tour Packages and explore the traditional Tamil culture through magnificent architecture, rock-cut caves and historical temples with Tamilnadu Culture Tour Package.

For more details and bookings, feel free to visit, www.tamilnadutourism.com and get a free quote for your itinerary.