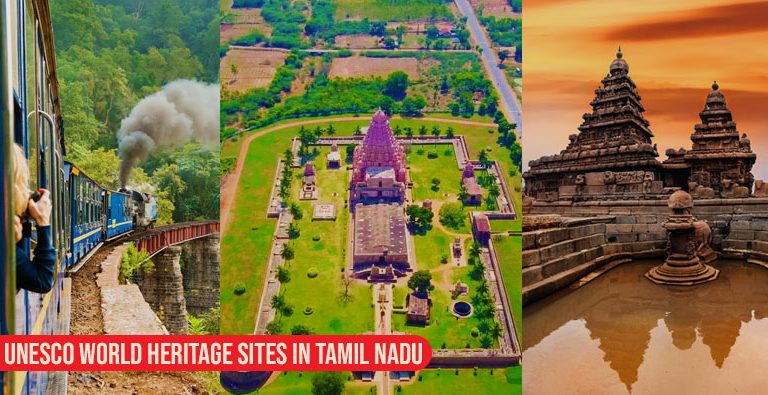 United Nations Educational, Scientific and Cultural Organisation shortly known as UNESCO is an organization that protects our rich cultural and historical lineage and spreading peace throughout the world. This specialized organization takes immense measures in protecting some of the most valuable man-made treasures across the world. And in India UNESCO had listed 29 world Heritage sites, in which four are from Tamilnadu.

Tamilnadu “the land of a rich heritage”

The aroma of rich soil fills the air of Tamilnadu and gives us pleasure as we enter its threshold. Tamilnadu is a renowned state in India and has been held in high regard by many ancient poets. This is the place where Tamil language ripened many centuries ago and is a main commercial center in the southern zone. This dazzling State takes pride in having the second largest beach in the world. The architectural style here is greatly admired by all. Apart from architecture, this city is famous for spicy foods, scrumptious vada, fluffy Idly (Rice cake) and especially Chettinad cuisines.

Monuments are the mouthpieces of our ancestors; every block of these impeccable arts has bundles of stories to tell, each pillar of these top-notch buildings has top secrets to share. Tamil Nadu monuments are marked by unique Dravidian architecture; they are emblazoned with intricate patterns that are one of their kinds. These marvellous monuments are still now an engineering wonder.

Tamilnadu is a blend of both- the modern and the ancient, which makes it a beautiful destination to explore and experience our past cultural heritage with all the amenities of the present. Through this blog, you may get to know about the four UNESCO monuments of Tamilnadu and other UNESCO world heritage sites in Tamilnadu.

Brihadeeswarar temple which is also known as the Tanjore Big Temple or Peruvudaiyar Kovil is world-renowned for its incredible architecture. This colossal shrine will make every beholder awestruck. Brihadeeshwarar temple is a Hindu temple dedicated to Lord Shiva located in the South bank of river Kaveri in the Thanjavur district of Tamil Nadu, India. Being the ardent devotee of Lord Shiva King Raja Raja Cholan built this temple with his utmost passion and brilliant architectural Style. Every nook and cranny of this colossal temple speaks of Raja Raja Chola’s fame. The deity was first named as the “Rajarajeshwar”. Later during the reign of Marathas, the deity was called as the Brahadeswar or the great Ishwara. According to the temple facts, the main sanctum was built purely with granite stones. It is believed that more than 130,000 tons of granite had been used in the construction of this specific building.

The Vimana i.e the main sanctum is six stories high and measures about 66m height. And the main vimana is hollow tower above with a huge boulder is places. Brahadeeswarar temple is the only temple that has this kind of structure among the temples of Tamilnadu. Even the construction of the walls of the main sanctum is unique. It is built using interlocking bricks and to our wild guess, it is built without using any binding materials. Yet another totally outlandish fact is that the shadow of the main sanctum never falls on the ground, be it any time of the day. The lovely paintings in the walls of the Big temple and the numerous inscriptions that were found around bear ample testimony to this fact.

The Brihadeswara Temple is located in the city of Thanjavur and it is well connected with prominent cities like Chennai, Madurai, Trichy, Coimbatore, Bangalore, Mysore, etc. city about 350 kilometers southwest of Chennai and about 55kms east of Trichy. Tiruchirapalli International Airport is the nearest airport with regular services at a distance of about 55 Kms.

This Dravidian architecture temple is located in the town of Darasuram, near Kumbakonam, Thanjavur District in the South Indian state of Tamil Nadu. Airavateswara Temple is a Hindu temple dedicated mainly to Lord Shiva. This temple is referred to as the Great Living Chola Temple by UNESCO and was declared as the UNESCO heritage site in the year 2004.

Darasuram is a small hamlet in Kumbakonam known worldwide for the incredible Airavatheeswarar temple. This temple is not only a place of worship but also apart of the UNESCO world heritage site. Built by Raja Raja Cholan II in the 12th century, this temple is yet another feather in the hat of Cholas. This incredible piece of art comprises of exquisite carvings, Chariot shaped Mandapams, huge Vimana and extraordinary artworks. The presiding deity here is Lord Shiva.

Gangaikonda Cholapuram Brihadeeshwarar Temple is just a replica of the masterpiece Tanjore Big temple also. The temple was constructed in 1035 AD by Rajendra Chola I (1014-44 CE), the son of the famous Chola king Raja Raja Chola I, who built the Brihadeeswarar Temple at Thanjavur. The grand colossal Nandhi is carved out and positioned in the same way as in Brahadeeswarar temple. After the victory over the Ganga dynasty, Rajendra Cholan built this incredible piece of art at his headquarters Gangaikonda Cholapuram. Now the Gangaikonda Cholapuram town is located in Jayankondam on the district of Ariyalur, Tamil Nadu, India.

One can find the five shrines in this temple and a lion well, which is said to be added during the 19th century. Apart from these, there are around 50 odd sculptures around the walls of the sanctum, in which the sculptures of Nataraja, Saraswathi and Lord Shiva garlanding a devotee is the most prominent.

Group of Monuments at Mahabalipuram

Mahabalipuram also known as Mamallapuram is known for its charming seashore and incredible rock sculptures. The Group of Monuments at Mamallapuram is a collection of 7th- and 8th-century CE religious monuments in the coastal resort town of Mamallapuram in Tamil Nadu, India and a UNESCO World Heritage Site. It is on the Coromandel Coast of the Bay of Bengal, which is 60 kilometers south of Chennai. A visit to this lovely place will rejuvenate all your worn-out cells and fill you with fresh energy. Nook and cranny of this place are dotted with numerous remarkable artworks.

The sculptures of Mahabalipuram are a piece of cake for all the archaeologist and architecture lovers. This small strip of land is more charismatic than any other place in Tamilnadu, the lovely waves dashing against the rocks and the beautiful rock sculptures anchored sublimely on the shores is a spectacular sight to behold.

Arjuna’s penance is the magnum opus of Tamil Nadu artist; this mid-seventh-century art is the world’s largest bas-relief. Its bulky size will make you wish for thousand eyes to capture this incredible art as a whole. This piece of art has lots of sculptures of Arjuna, Lord Siva, huge elephants, and whatnot. This place is surely worth a visit, these whole carvings are based on the folklore of Mahabharata. Other monuments are based on varied god and goddesses of the Hindu religion. Few Buddha sculptures are found in here. The noteworthy monuments are Pancha Rathas, the shore temple, Varaha temple, and Descent of the Ganges. Most notable Cave Temples of Mahabalipuram are Varaha Cave Temple, Krishna Cave Temple and Panchapandava Cave Temple.

(Click here…) to know about the complete guide about Mahabalipuram

The Nilgiri Mountain Railway is a 1,000 mm meter gauge railway, built by the British in 1908, and is operated by the Southern Railway. This is one of the key attractions of the popular hill station Ooty in Tamilnadu. What make the ride a most memorable one is its picturesque scenic that surrounds. A ride in this lovely train will surely cast chill down your spine and will be one of the most unforgettable journeys in your lifetime.

Note: Nilgiri Mountain Railway is the only rack railway in India.

Western ghats of India also known as the Sahyadri Mountains is declared as the UNESCO world heritage site and top ten “Hottest Biodiversity Hotspots in the world”. This mountain range is older than the Himalayas and consists total of thirty-nine properties which were designated as world heritage sites in 2012, Twenty in the state of Kerala, ten in Karnataka, five in Tamil Nadu and four in Maharashtra.

So these are the UNESCO World Heritage site of Tamilnadu, I hope by this time you would have added these place to your bucket list.

The land of cultural and religious heritage offers every chance to its tourists and pilgrims to be enchanted with the vast plethora of history and beauty that it has.

Tamilnadu Tourism offers great tour offers that include all the heritage sites of Tamilnadu. Pack your baggage and set a trip to Tamilnadu for this vacation and explore all of your desires destinations.

Enquire now and get the best deals and offers for your itineraries.