Woraiyur , a part of present day Tiruchirappalli, was the capital city of Cholas from 300 B.C. onwards. This is supported by archaeological evidences and ancient literatures. There are also literary sources which tell that Woraiyur continued to be under the control of Cholas even during the days of Kalabhra interregnum (A.D. 300 – 575).

Later, Woraiyur along with the present day Tiruchirappalli and its neighbouring areas came under the control of Mahendra Varma Pallava I, who ascended the throne in A.D. 590. Till A.D. 880, according to the inscriptions, this region was under the hegemony of either the Pallvas or the Pandyas. It was in 880 AD, Aditya Chola brought a downfall to the Pallava dynasty. From that time onwards Tiruchirappalli and its region became a part of Greater Cholas. In 1225 A.D the area was occupied by the Hoysulas. Afterwards, it came under the rule of later Pandyas till the advent of Mughal Rule. Tiruchirappalli was for some time under the Mughal rule, which was put to an end by the Vijayanagar rulers. The Nayaks, the Governors of Vijayanagar empire, ruled this area till A.D. 1736. It was Viswanatha Nayaka who built the present day Teppakulam and the Fort. The Nayak dynasty came to an end during the days of Meenakshi.

The Muslims ruled this region again with the aid of either the French or the English armies. For some years, Tiruchirappalli was under the rule of Chanda Sahib and Mohamed Ali. Finally the English brought Tiruchirappalli and other areas under their control. The district was then under the hegemony of British for about 150 years till the independence of India. Situated on the banks of river Kaveri, Tiruchirappalli, the fourth largest city in the state was a citadel of the Early Cholas which later fell to the Pallavas. But the Pallavas never really managed to retain control of this strategic city and lost it to the Pandyas several times. This tug of war finally ended when the Cholas reasserted themselves in the 10th century. Trichy continued to be in their possession until the decline of the empire after which it became a Vijayanagara stronghold.

When this empire collapsed in 1565, Trichy came to be occupied in turn by the Nayaks of Madurai, the Marathas, the Nawabs of Carnatic, the French and finally the British. But it was under the Nayaks of Madurai that Trichy flourished and prospered in its own right and grew to be the city that it is today. Trichy flourished and prospered in its own ,built around the Rock Fort. Apart from the fort there are several churches, colleges and missions dating back to the 1760s. With its excellent infrastructural facilities Trichy will serve as a good base to see central Tamilnadu.

It was one of the main centers around which the wars of the Carnatic were fought in the 18th century during the British-French struggle for supremacy in India. Monuments aside, the city offers a good range of hotels and an excellent local bus system which does not demand the strength of an Ox and the skin of an Elephant to use.

The city has a multi-cultural society with a sizeable presence of Tamil, English, Marathi, Telugu, Hindi, and Malayalam-speaking population. The city projects a calm outlook and is considered to be friendly toward tourists. One may experience typical Anglo-Indian, Andhra, Kerala and Tamil Nadu cuisines here. In addition to Pongal, the Thamizhar Thirunaal, Ugadi, Holi & Onam are festivals celebrated by their respective communities retaining their cultural roots.

People living in Trichy have a rich ancient cultural heritage. The city served as the centre of fine arts since sangam literature periods. Uraiyur, the old head and name of the city, was the capital of early Cholas. Here lived a number of great Tamil Scholars and contributed to the Tamil literature. 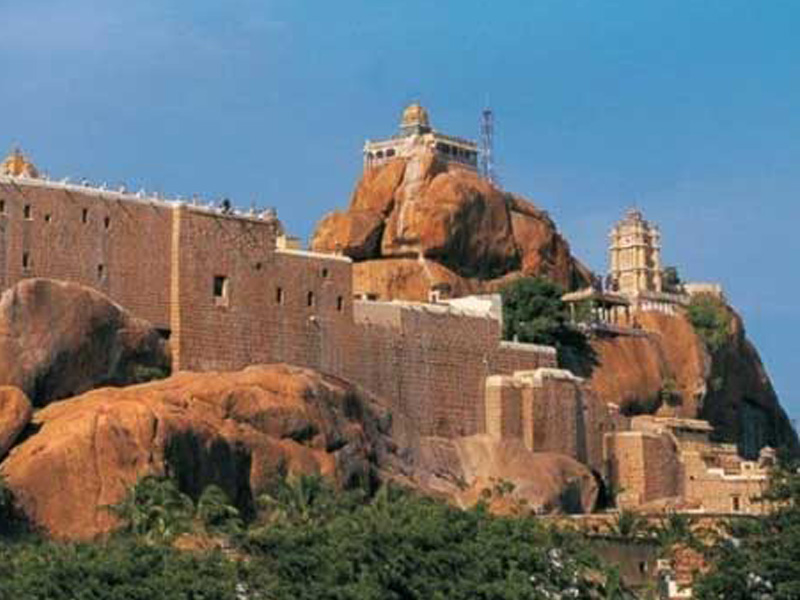