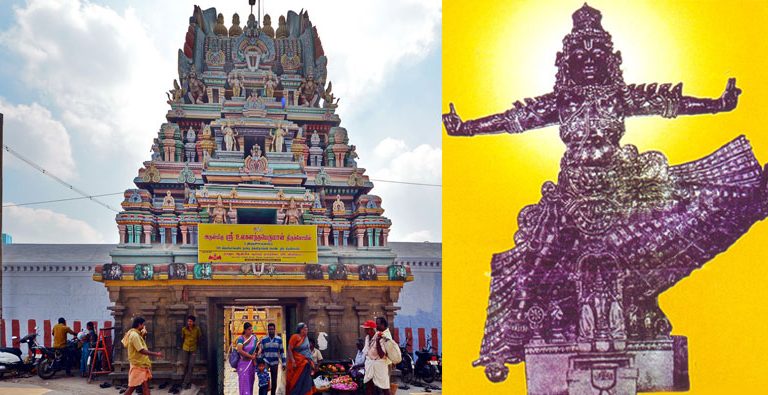 Kanchipuram – “The City of Thousand Temples”, is a delightfully enchanting marvel dotted with a thousand temples that bear testimony to the excellent craftsmanship of sculptors and artisans of ancient South India. Matchless in its beauty and enigmatic in its architecture, the temples in Kanchipuram are absolute wonders that eyes have ever beheld. Deemed as the second holiest city after Varanasi, Kanchipuram is a much-sought-after pilgrimage site for Hindu devotees. Besides its mesmerizing temples, the beautiful and elegant Kanchipuram silk sarees, enchanting landscapes, dynamic culture and exotic cuisines make Kanchipuram amazingly incredible.

Kanchipuram is an ancient traditional land in Tamilnadu, known for its unique and exceptional fabrics. This city is a great place to go for shopping and buying rich silk clothes. Apart from sarees and dresses, Kanchipuram has lots of famous temples to visit. One such prominent temple at Kancheepuram is the Ulagalantha Perumal Temple.

According to the inscriptions this temple was built by Nandiarma III in the year of 846 to 869 and was later renovated by the Pallavas and Cholas. This temple is located in Kancheepuram district and is very near to the famous Kamatchi Amman temple.

The Significance of Vamana Avatar

Vamana Avatar of Lord Vishnu is nothing but a disguise of a humble Brahmin priest. He took this Avatar to restore the power of Lord Indira in heaven by defeating Mahabali. Mahabali was none other than the grandson of Pragalathan. Unlike his grandpa, Bali was very ardent and was determined to capture both heaven and earth. He finally dethroned Lord Indira and took charge of Heaven and earth and he was hailed by his followers as the Mahabali. In order to restore the Dharma and protect the world from the evil hands of Mahabali, Lord Vishnu took the form of a humble Vamana. As Mahabali was his devotee, Lord Vishnu doesn’t want to kill him, rather he wanted to teach him a lesson,

On a fine day, Mahabali was performing his Upanaya, Lord Vishnu as Vamana approached Mahabali for a grant. Seeing his little figure Mahabali laughed and promised to grant him any wish he wants. The humble Vamana asked for just a three-foot of land that he could transverse through, the whole king’s court burst out in laughter as this little Vamana asked for a three-foot of land. But to their amusement, the one-step of Vamana covered the whole of heaven, the second step all of the earth and there was no place for the third step. Realized that this Vamana is none other than Lord Vishnu himself, Mahabali gave his head to place the third foot of Vamana. Thus Vamana pushed Mahabali to the Patha Loka (the hell) and thus save heaven and Earth.

The Ulagalanthar Perumal temple’s main deity depicts the Vaman avatar of Lord Vishnu which stands about 35 feet tall and 24 feet wide. The lord shows his one finger of the right hand, symbolizing his first step and shows two fingers of the left-hand symbolizing the second step for the third step he raises his feet above denoting the final step on Mahabali’s head. This form of the idol of Vishnu is knowns as the Trivikrama. Other than this the temple houses four more Divya Desams namely Thirukkarvaanam, Thirukaaragam, Thiruooragam and Thiruneeragam.

Thiruooragam is the smaller shrine that houses the image of snake god Adisesha. As per tradition, Mahabali at the foot of Vamana could not view the Viswaroopam and requested to have a smaller form, and so Lord Vishnu appeared as a snake.

This shrine is situated in the third premise of the temple. The Presiding deity is the Karunakar Perumal facing north and seated on the Adishesha with his consort Padmamani Nachiyar. The temple tank associated with it is called Agraya Tirtha and the vimana is called Vamana Vimanam or Ramaya Vimanam.

The shrine is situated in the second precinct. Lord Kalvar is the presiding deity and faces north, with his consort is Kamalvalli Thayar. Gauri Tatakam and Taratara Tatakam are the temple tanks associated with the temple and the vimana is called Puskala Vimana.

Food and drinks- places to dine

Kanchipuram has many hotels, street stalls, and a mess. The food serves here is typical south Indian and mostly vegetarian.

Kanchipuram is a temple city with lots of temples everywhere. The hotels here serve the best Tamilnadu cuisine. Being a pilgrim city most of the hotels her serve vegetarian food. There are also many small food stalls and street foods. Taste the palatial south India cuisine at Kanchipuram and relish its taste.

Activities- Things To Do

Kanchipuram the land of silk is the best place to learn about one of the ancient occupations of our ancestors, weaving of cloths. Most of the people who lived at Kanchipuram in the past are weavers and their major occupation is silk thread weaving.

Once you are here, you can indulge in activities like weaving sarees in ancient methods, the printing of patterns in sarees and dupattas, color dyeing and designing of dresses and etc. Take a break from your routine life and get to know about many amazing things at Kanchi.

How to get there:

Kanchipuram is located at a distance of 76 km from Chennai. It can be easily reached from cities like Chennai, Villupuram, Thiruvallur and Vellore. Inside the city, we can get lots of Share autos which take us to the important destinations of the city at a very reasonable price.

Transport in Kanchipuram is active throughout twenty-four-seven and buses to all important cities are available.

There is no airport in Kanchipuram, and the nearest airport is in Chennai, which may take two hours to reach.

Kanchipuram is well connected by rail and has a railway station inside the city. Trains from Chennai, Madurai and Trichy arrive often.

Never miss visiting Kancheepuram while your trip to Tamilnadu. This place is apt for both pilgrims and shoppers.

For more details, visit www.tamilnadutourism.com and save up to 15% on every Tamilnadu tour packages.