Madurai – The Oldest Living City In The World 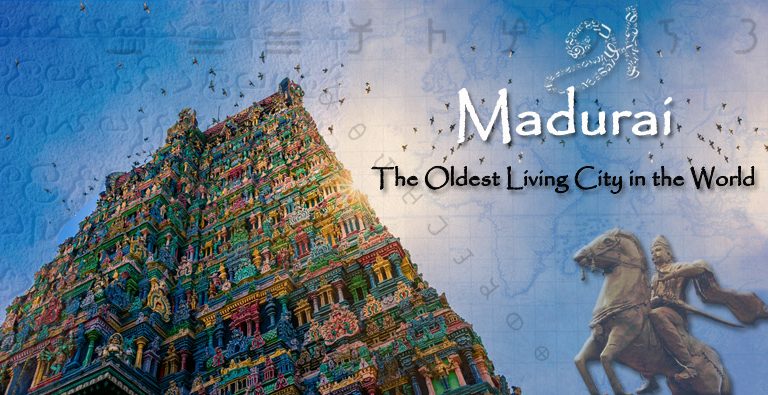 Madurai – The Oldest Living City In The World

Madurai – The Oldest Living City From the Oldest Democratic Kingdom

Madurai is Tamil Nadu’s third-largest city and 44th most populated city in India. Located on the banks of River Vaigai, Madurai has been a major settlement for two millennia. Madurai is one of the best tourist destinations which have a glorious past combined with a great variety of temples and great architectural treats. The history of Tamil and Tamil Nadu without Madurai is impossible. One of India’s greatest temples Madurai Meenakshi Amman, exquisite interiors of Thirumalai Nayak Mahal, historic tales of Gandhi Museum, architectural excellence of Koodal Azhagar Temple, and one of the six abodes of Lord Murugan – Pazhamudir Solai are found in the “Pancha Sthala” land of Madurai. But Madurai is not just its heritage buildings, its contribution to the temples of Tamil Nadu, and George Church, this ancient city is the last remaining mega-evidence of a glorious past of the oldest Kingdom in the world.

The temple city is one of the oldest cities in India but is it the oldest city in India? How well was Madurai connected to the rest of the world?

Keep your hot mug of coffee ready and dive into the world of discovery!

The Pandyan Kingdom | The Oldest Democratic Kingdom in the World

The search for knowledge from the beginning of human origin has lead to a countless number of discoveries beneficial for human existence. Homo Sapiens, the highly evolved human race has surpassed the limits of Homo Erectus, Neanderthals, and many other species to come up victorious. The advanced cognitive abilities of our species and the ability to coexist with each other have made us evolve into what we are today. Good or bad? Nature only has the answer. When the 5 million-odd population of the “Hunter and Gatherer Society” was exploring the vast boundaries of the earth, the Agricultural Revolution happened and wheat domesticated human beings. Again, good or bad? Nature only knows.

But why is there a need to know about our ancestor’s past? What good it could bring? How only a few people could understand the language of earth better than others? How could a set of people bond with every other human being in the most natural way possible? The answers to these questions would not only reveal the values of human life but also describe its purpose and idea. While a million concepts are revolving around the universe about the earliest explorers of this planet, there existed one country, one great democratic empire, one adorable kingdom, probably the oldest in the world. It is believed to have ruled the lost continent of Lemuria.

The Pandyan Kingdom! The oldest democratic kingdom in the world. Know the prowess, connections, and integrity of the Pandyan Kingdom to understand the eastern world. Finally, learn about the hotbed of Tamil Civilization, Madurai City, the oldest city in India from various angles based on genuine proofs from scholars and explorers like Megasthanese.

Kumari Kandam and the Pandyan Kingdom

Lemuria was the name given coined by the English geologist Philip Sclater (1864) in the article “The Mammals of Madagascar”. The same land is mentioned as “Kumari Kandam” (The Virgin Continent) in the Eastern world. According to geologists, McKenzie and Sclater, Africa and South America were connected about 2 million years ago. While India, Africa, Arabia, South America, Antarctica, and Australia developed into separate landmasses. This had happened to the natural phenomenon of the earth – Tectonic Plate Movements (“Navalam Theevu” in the Tamil language).

From the untouched land of Kumari south of present-day Tamilagam, about 15,000 years ago, some people moved to Arabia and became Jews. While our inevitable neighbors moved to Africa and became Sumerians.

The mention of 49 territories (“Ezhuthangu Nadu” in Tamil) in the Tamil epic, Silapathikaram consists of

These lands were lost to the ferocity of the sea. The wrath of the ocean over the Pandyan Kingdom in Tamil literary marvels like Silapathikaram and Kalithogai is a piece of solid evidence. The famous Tamil prose, “Iraiyanar Agaporul” mentions a noteworthy fact. The rule of 72 kings of the Pandyan Empire of the territories of Lemuria (including the Kumari Kandam) from 30,000 B.C to 16,000 B.C. Although it is debatable, there are concrete proofs in Tamil literature about the dominance of the Pandyan Kingdom close to 10,000 years over the Lemuria Kingdom.

The Pandyan Kingdom and their Love for Tamil

To spread and promote their love for literature, poetry, and knowledge, Pandyan Kings set three Tamil Sangams within their emphatic rule of 11,000 years. The base for preserving the Tamil language. Tamil Nadu and its language’s existence could have been denied like the Sanskrit Language if Pandyan Kings haven’t taken this historic effort.

The First Tamil Sangam was established near South Madurai, the Pandya’s capital city. The chairperson was Sage Agastya. The Sangam lasted for 4440 years before losing it to the seas.

The Second Tamil Sangam was established in Kapadapuram after losing the majority of the land to the sea. The Sangam gave Tolkappiyam and lasted for 3700 years before another cataclysm devoured it.

The Third Tamil Sangam was established in Korkai, the capital of the Pandyas. This Sangam survived better than the other two and lived its legacy in the honorable holy land, Madurai. The Third Sangam lasted for 1850 years.

Towards the end of the Mesozoic Era or the Age of the Dinosaurs, Lemuria broke into several heaps of lands. This makes it clear that Kumari Kandam existed and confirms the presence of the powerful Pandyan Kingdom. History’s first democratic kingdom from where knowledge spread across the world.

Atlantis and the Pandyan Kingdom

The findings of Plato, the Athenian philosopher (modern-day Greece) about Atlantis (another continent that is believed to have been destroyed by the sea) describes the possibility of a healthy relationship with the Pandyan Kingdom. The geographical boundaries of Kumari Kingdom ruled by the Pandyan rulers is as similar to “Biblical Garden of Eden”. Meru Malai is equivalent to Malea mountains which are found in Ptolemy’s account of Taprobana. The 48 mountain ranges, gold, and precious stone mining traces, and the four rivers importantly connect the concept of Atlantis with that of Kumari Kandam. Pahruli River excavation revealed that scholarly figures from both the ends were in connection with each other. Kumari Aaru, Peru Aaru, Pahruli Aaru, and Kanni Aaru can be highly related to Kahayan, Kapuas, Barito, and Negara Rivers.

Note: Ruby was mined from the “Mani Malai” while Chinese laborers were brought to “Meru Malai” by Pandyan Rulers for digging gold. The appearance of the Chinese workers looked like a colony of ants and was known – The Gold Mining Ants. The Pandyan Kingdom was not only connected to China and South Asia but with Europe too.

Trade with Other Continents and Countries

The recent Manalur excavation near Madurai revealed the trade activities of Madurai and Ancient Rome, as early as 300 BC. Megasthanese, the famous Greek Voyager had mentioned the Pandyan Kingdom by two names – “Pandaie” and “Methora” (nothing, but Madurai). Explorers like Ptolemy, Pliny, Plutarch, and manuscript documents like Periplus of the Erythrean Sea have clearly explained the trade routes of Madurai with Greek and Rome during the 1st and 2nd century. The Greeks had traveled via Egypt to reach the ancient Tamil Kingdom in Madurai for trade purposes, especially pearls from “Korkai” (now it is Thoothukudi) and ruby from surrounding provinces.

The collective moniker of the past Greek and Roman traders is “Yavana”.

Arikamedu (near Pondicherry) excavations revealed the presence of ancient Roman coins, jars, porcelains, and cloth dyeing tubs along with their exquisite pottery works. These excavations and ongoing Keezhadi excavations have clearly shown the friendly connection of Tamil Nadu, especially the archaic city, Madurai with great monarchs of the Roman Era like Tiberius, Augustus Caesar, and Nero belonging to the 1st and 2nd Century AD. The Roman merchants have stayed in the Pandyan Kingdom and served their army units too.

The Golden Legacy of the Oldest City in India – Madurai

So what makes Madurai the oldest city in India? Three strong reasons, the continent from which it originated, the level of trade activities in a period where the rest of the world was still exploring the secrets of the trade, and the strongest reason being the language – Tamil, the oldest language in the world. Madurai and Tamil are inseparable. The original carvings and records of modern Tamil, call it “Brahmi” or “Tamizhi”, were found elsewhere and in Madurai also. After the 5th Keezhadi excavation and work of many cultural enthusiasts, the origin of Tamil is older than everybody knows. The finding of artifacts near Tharangambadi was 6,000 years older than an Egyptian artifact which was believed to be the oldest earlier. Madurai was not just the oldest city by chance but was a well-planned city that remained as the epicenter of trade, culture, language, and courageous acts.

Explorers like Ibn Batuta, Marco Polo, and Megasthanese have made noteworthy markings in their record about the prosperous nature of Madurai. The holy nectar of Lord Shiva’s tresses is what gave the sacred city its name – Madurai.

Note: Writings and carvings on pots by Women some 2500 years back, and chess coins made out of ivory found from Keezhadi Excavation are not just remnants of Tamil language and its civilized people but reminders of the greatest civilization to have ever walked on this planet. The good thing is Tamil will be eternal and will continue to surprise the world till doomsday.

In the shape of a coiling serpent, Madurai was built around the Meenakshi Temple. The construction of this ancient city keeping the temple at its center and streets in concentric rectangles connects with the arrangement of the Cosmos. The whole city takes the structure of the lotus flower. Similarly, Athens, an ancient city in Greek Pantheon was kept in the center. At an elevated surface, it was visible for everyone from any location around the city. In Madurai, the imposing towers of Meenakshi Sundareswarar were built so that everyone could glance at the holy place.

Likewise, the pedestrian walkways of Rome and Greek were similar to the ones in Madurai city which gave importance to its wayfarers. Madurai is the “Athens of the East” or historians would agree with this sentence – Athens is the “Madurai of the West”.

Is Tamil the Oldest Language? Stay in touch to know the greatest truth.

Tamil Language and its history

Madurai always delivers the best traveling experience to its visitors and tourists with its rich heritage and culture. Explore the “Temple City” with Tamilnadu Tourism. Experience the real charm of the oldest city in India and other temples of Tamil Nadu. You can write back to us with beautiful photographs of Madurai. Your works will be featured along with your smiling selfies!

For more details and bookings, feel free to visit, www.tamilnadutourism.in and get a free quote for your tour itineraries.

Keeladi Civilization has brought us to light many untold secrets about the ancient terra of Madurai and its civilized behavior with the rest of the world.

To know about the recent excavation in Keeladi near Madurai, (click here…)

2 thoughts on “Madurai – The Oldest Living City In The World”