THE BELIEF AT KUMBAKONAM CHANDIRANAAR TEMPLE 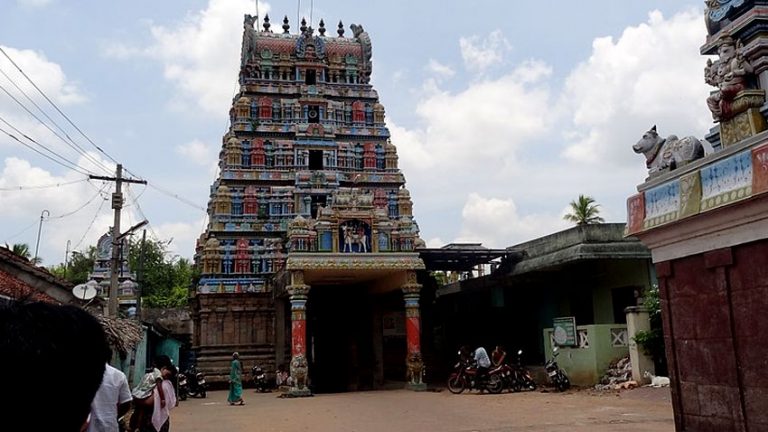 THE BELIEF AT KUMBAKONAM CHANDIRANAAR TEMPLE

Worshipping Navagrahas – Sun, Moon, and other planets is an important aspect of the Hindu way of life. In Hindu belief, the grahas can be auspicious or inauspicious based on its planetary position at a given point of time and can determine the course of one’s life. They are believed to grasp and deploy karmic forces that affect one’s life, both in a positive and negative manner.

Moon or Chandra is known to have a profound impact on our lives. He is the Lunar deity and one of the most powerful celestial body in Hinduism, who is regarded as the symbol of Harmony, Fertility, and Stable Mind. The Moon God, Chandra is also called Kshuparaka, one who illuminates the night or Rajanipati, the lord of the night. He rules the human mind and is known to influence one’s imaginative and intuitive nature. It is believed that a strong and well-positioned moon in the Horoscope bestows a strong mind. But if the moon is debilitated or distressed by evil planets like Rahu, it may lead to an unstable mind, mood fluctuations, sorrow, etc. Visiting Chandra Navagrahasthalam and offering worship to the Moon God, Chandra is regarded as an excellent solution (Parihara) for Chandra Dosha which can help mitigate its adverse impact thereby bestowing relief from all unhappiness and offering emotional and mental stability.

So, which temple do we visit to rectify the malefic effect of the moon in Horoscope? Is there any Chandra Navagrahasthalam in South India? Yes, Kumbakonam Chandiranaar Temple, also called Kailasanathar Temple is one of the most revered Navagrahasthalam for Moon in Tamilnadu. Those who suffer from a weak or debilitated moon in the horoscope or a weak mind or financial instability, etc; can pay a visit to Kumbakonam Chandiranaar Temple to seek the blessings of the Moon God and to get relief from their Chandra dosha.

What is the belief at Kumbakonam Chandiranaar Temple in Tamilnadu? Let’s take a look:

The main belief at Kumbakonam Chandiranaar Temple is that it is here that Lord Chandra prayed to Lord Shiva and got his blessings. Legend has it that after churning the Paarkadal (Milky Ocean) by the devas and the asuras, Lord Vishnu in the guise of Mohini was distributing the Amrutham (nectar) only to the devas. Then, one of the asuras in the guise of a deva, at the behest of Sukrachariyar, consumed the nectar which was distributed by Lord Vishnu. Surya and Chandra who noticed this complained to Lord Vishnu. Angered and worried, Lord Vishnu cut the Asura’s body into two using his chakrayudham (discus) and threw them away. The head of the Asura joined with a snake’s body to become Rahu Bhagavan while his body portion kept growing as he had consumed Amrutham. Later his body joined with the head of a snake and became Kethu Bhagavan.

But Rahu and Ketu did not pardon Surya and Chandra. In turn, Rahu went after Chandra and started consuming him. Lord Chandra prayed to Lord Shiva and He blessed Him with the power to grow back to full size in 15 days after being consumed by Rahu. It is believed that this is why we have waxing and waning moon. Chandra attains full brightness on the Full Moon Day or Pournami and starts losing his beauty and brightness till the New Moon Day or Ammavasai.

The concern in mother’s wellbeing, wealth, and health issues like mental retardation, skin and nerve problems, jaundice, and fluid accumulation are some of the troubles that occur due to Chandra Dosham. It is believed that problems due to Chandra Dosham will be eradicated by worshipping at this Chandra Navagrahasthalam, Kumbakonam Chandiranaar Temple in Tamilnadu.

Since Chandra controls our minds, by worshipping Lord Shiva and Lord Chandra in Kumbakonam Chandiranaar Temple, our mind related problems, such as mental worries, tensions, and psychiatric problems will be healed. Hence, it is advisable to visit and worship and have the darshan of Lord Shiva and Lord Chandra at Chandiranaar Temple especially during Mondays, to get all the prosperities in our life. Lord Chandra blesses his devotees who pray here with wealth, health, mother’s wellbeing, wife’s happiness, prosperity, success, progress in educational studies, marriage, and offspring. Mondays are regarded as the special days for Chandran. Raw rice pudding mixed with jaggery, white flowers and white clothing are the main offerings of this temple.

The main speciality of Kumbakonam Chandiranaar Temple is the ritual of first rice feeding to infant children called Anna Prasanam. The priest of the temple shows the child moon and a cow before feeding the child with rice, hence bringing the blessings of Jala devatha (water God) and Oushadhi Devatha (God of medicines). Devotees also believe that Jala devatha would protect the child from fever and cold and even if it so happens, the Oushadhi Devatha would cure it.

About Kumbakonam Chandiranaar Temple and its Architecture:

Dedicated to the Moon God, Chandra (Soma), the Chandiranaar Temple or Kailasanathar Temple (Thingalur Temple) is situated in the village of Thingalur, near Kumbakonam in Tanjavur district of Tamilnadu. And is one of the most revered Chandra Navagrahasthalam in South India. However, the main idol of this temple is “Kailasanathar” or Lord Shiva. The presiding deities here are God Kailasanathar (Lord Shiva) and his consort Goddess Periyanakiamman (Goddess Parvati). And the temple houses a separate shrine for the Moon God, Chandra.

The Kumbakonam Chandiranaar Temple reflects beautiful Dravidian style architecture with amazingly carved five-tiered gopuram over the shrine. The temple houses a 16-sided Shiva Lingam made out of black granite and a huge Nandi statue. The most unique and rare feature of Kumbakonam Chandiranaar Temple is that during the Tamil months of Puratasi (September – October) and Panguni (March – April), the glorious rays of the moon fall on the Shiva Lingam.

Visit Kumbakonam Chandiranaar Temple in Tamilnadu to seek the blessings of the Moon God and to rectify your Chandra Dosha. Have a blissful darshan and May the Lord bless you with all the prosperities in life.