Popular Temples To Visit In Trichy 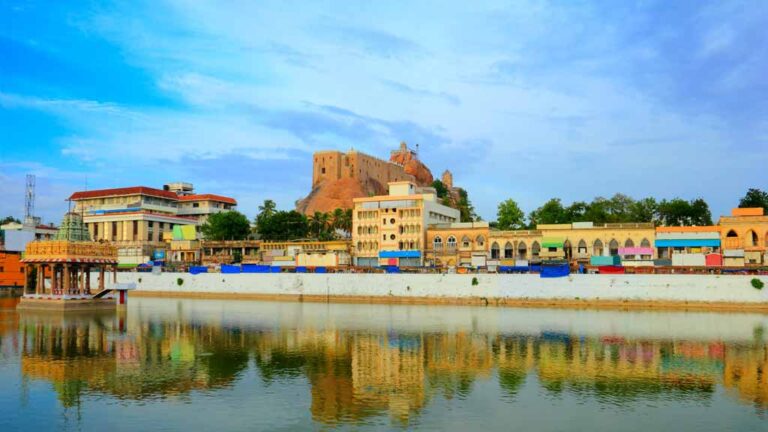 Popular Temples To Visit In Trichy

Trichy/Tiruchirappalli is a great tourist destination for many reasons, marvelous temples being one of them. Temples in Trichy are a testament to the various dynasties and empires that ruled the region such as the Cholas, the Pandya, the Pallava, the Carnatic Kingdom, the Vijaynagar Kingdom, and even the British. These temples are not only steeped in religious history and faith but also are a wondrous sight to behold that showcases spellbinding architecture and exquisite ornate works.

Exploring the beautiful temples will surely be the highlight of your Trichy trip. Apart from their religious significance, these divine places of worship can be visited for their beauty, splendor, and fascinating myths.

Since we cannot include all the temples in Trichy in this blog, we’ve compiled a list of Popular Temples that are a must-visit in Trichy.

Ucchi Pillayar Rockfort Temple is the most popular temple in Trichy. A prominent landmark of Trichy city as well. Built atop a massive rock, this 7th-century Hindu temple is dedicated to Lord Ganesha, offering all-embracing views of the entire Trichy city, Kaveri River, and Srirangam Island.

The temple displays amazing rock-cut architecture. The huge rock used for the construction of this temple is believed to be the oldest rock in the world, even older than the Himalayan Mountains. Be ready to make a steep climb up 344 steps to reach the temple.

Beautifully placed on the Srirangam Island in Trichy, Sri Ranganathaswamy Temple is dedicated to Lord Ranganatha, a reclining form of Lord Maha Vishnu.

This is the Largest Temple in India which leaves you in awe with its amazing Dravidian-style architecture and Hall of more than a thousand ornamented and carved pillars. This temple is considered the first and foremost among the 108 Divya Desams dedicated to Lord Vishnu and is also deemed the World’s Largest Functioning Temple.

This sacred Shiva temple is one of the revered Pancha Bootha Sthalams that represents the element of water (appulinga). Lord Shiva is worshipped here as Jambukeswarar and the Goddess Parvati as Akilandeswari Amman. The legend has it that a spider who attained moksha after worshipping Lord Jambukeswarar was blessed to be born as Kochengat Cholan in its next birth had constructed this mighty temple around 2500 years ago on Srirangam Island in Thiruvanaikoil, Trichy. The Thiruvanaikoil Jambukeswarar Temple is endowed with 5 corridors (Prakarams) that are a remarkable sight of architectural grandeur. It is believed that the 5th Prakaram of this temple is built by Lord Shiva himself, appearing in the form of a Spider.

Vekkali Amman Temple is dedicated to Goddess Vekkali who is considered a reincarnation of Goddess Durga. It is located in the village of Woraiyur in Trichy, and the natives see Vekkali Amman as their guardian deity. The temple is built in the Dravidian style of architecture and the absence of a roof over the sanctum is its key feature. The sacred shrine of the Goddess in this magnificent temple is made of gold and silver. It is quite interesting that the devotees write their wishes, sorrows, and miseries in a paper and tie it to the trident anchored before the Goddess, with the hope that the Goddess will read them and take care of all their problems.

Samayapuram Mariamman Temple in Trichy is the second wealthiest temple in Tamil Nadu. It is dedicated to Goddess Mariamman who is believed to be the form of Goddess Parvati, Durga, and Kali. A strong belief among the devotees is that Goddess Mariamman cures diseases like smallpox and chicken pox.

Unlike all other Hindu temples, here the main idol (idol of Goddess Mariamman) is not subjected to “Abhishekam” (sacred washing) as it is made up of sand and clay. Instead, as a token of respect and devotion, “Abhishekam” is done to the small stone statue in front of the idol. Keeping small metallic replicas of the idol and donating it in the donation box of the temple whenever a family member falls sick on the belief that the Goddess will cure their illness is a unique ritual associated with this temple.

Dedicated to Lord Vishnu, Sri Pundarikakshan Perumal Temple is reckoned the oldest of the Vaishnavite sites located in all of South India. It is situated in Thiruvellarai, a village on the outskirts of Trichy. Portraying typical Dravidian style architecture, Thiruvellarai Sri Pundarikakshan Perumal Temple, as per legends, is believed to have been built in Treta Yuga, 15 lakh years ago by the king of Ayodhya Sibi Chakravarthy, a forefather of Sri Rama. The half-finished Raja Gopuram is its unique feature. The first 18 steps at this temple represent the 18 chapters of the illustrious Hindu scripture Bhagavad Gita and the last four steps represent the four Vedas, namely Rigveda, Yajurveda, Samaveda, and Atharvaveda. In between are a set of 5 steps which represent Pancha Bhootas, a set of eight stairs which represent the Ashta-Aksharam (an eight-syllable word), that is, ‘Om Namo Naaraayanaaya‘, and a set of 24 stairs which represent one of the Gayathri Mantras (a highly revered Sanskrit mantra).

Positioned in the Kumaravayalur village in Trichy, Vayalur Murugan Temple is dedicated to Lord Murugan, the son of Lord Shiva and Goddess Parvati. This temple is around 1200 years old and was built in the 9th century AD during the reign of Cholas. The beautiful temple looks so impressive with its intricately designed temple tower and the lush green fields surrounding the temple add to its exquisite charm. There is a sacred temple tank which is popularly believed to have been built by Lord Murugan himself with his mighty weapon Velayutham.

Neelivaneswarar (Gneeliwaneswarar) Temple also known as Vishwanathar Temple is one of the 276 Paadal Petra Shiva Sthalams. It is located at Thirupangeeli (Thirupanjali), 20 km north of Trichy. The presiding deity, Lord Shiva is in the form of Swayambu Linga (self-manifest). This temple is popularly known as “South Kailash” and “Melai Chidambaram”. Neelivaneswarar Temple is a revered“dosha Parihara Sthalam”, especially for Kalathira Dosham, Thara Dosham, Sevvai/ Angaraka Dosham, and Mangalya Dosham. Devotees often visit this temple to perform poojas for early marriage and to seek “Santana Prapthi” for child boon.

Prasanna Venkatachalapathy Temple (Gunaseelam Vishnu Temple) is another popular temple in Trichy and is dedicated to Lord Vishnu who is worshipped here as Prasanna Venkatachalapathy. It is located on the banks of River Kaveri. It is believed that a visit to this temple can be curative to mentally challenged people. The temple also has set up a mental health rehabilitation centre with volunteers who take care of mentally challenged people on a daily basis. This rehabilitation centre is today a blend of faith and modern treatment that has the official stamp of the Tamilnadu Government license, the first of its kind in the state.

Sri Ayyappan Temple in Trichy is the most visited temple by all the Ayyappa devotees after the world-renowned Sabarimala Temple in Kerala. The best part is that everyone is treated equally here, regardless of religion, caste, and creed without any discrimination. This amazing temple is designed in authentic Kerala architecture and is surrounded by lush greenery. You can see here numerous little stones, collected from holy sites and holy rivers all over the world that have been placed on many small platforms with the names of the holy places and rivers. It is believed that having the Darshan of this collection of holy stones in one spot helps one overcome difficulties and to succeed in life. This Sri Ayyappan Temple also houses shrines for Lord Ganapathi, Sri Bhagavathi Amman, and Lord Nagaraja, along with a shrine dedicated to the Navagrahas.

This famous Lord Murugan Temple is built by Aditya Chola in the 9th century. The temple derives its name from the hill called Viralimalai, where it is located. The idol of Lord Murugan at Viralimalai Murugan Temple is in the form of Arumugam, six-faced and with twelve hands seated elegantly on the peacock facing east. The unique offering to the lord at this temple is a Cigar which is made of sandal paste. One has to climb 207 steps to reach the temple. On the eastern side of the foothill, there is a shrine for Goddess Maikannudaiyal, and it is customary to worship this goddess before climbing up the hill. Viralimalai Murugan Temple is especially known for the peacocks that are found in plenty around its premises.

Erumbeeswarar Temple is one among the series of temples built by Aditya Chola along the banks of the Cauvery River, to mark his victory over Pandyas during the Tirupurambiyam Battle in 885 CE. The temple is dedicated to Erumbeeswarar, a form of Lord Shiva and is believed to be self-manifested. Since it is a sand Lingam, no Abhishekams are performed here. Legend has it that Lord Shiva has transformed himself into an ant hill at this place and tilted his head to enable ants to climb up and worship him. Surprisingly, you can see that the Shiva Lingam of this temple is slanting to one side and also the marks of ants creeping on the Lingam.

Akkaraipatti Shirdi Sai Baba Temple is one of the largest temples in South India devoted to Shirdi Sai Baba, a revered Indian saint of the 19th century. It sprawls over an area of 35000 sq ft. The temple is so grand and impressive and a must-visit in Trichy. It is situated in Akkaraipatti, near Samayapuram.

Mural paintings of the deities adorn the temple walls while a variety of beautiful frescoes depicting Sai Baba’s manifestation are painted on the temple’s internal false ceiling that adds to the mesmerizing beauty of the temple. The shrine also houses a magnanimous idol of the saint.

These are some of Trichy’s most popular temples that are well- worth a visit during a vacation in Trichy!

Have you visited any of these Popular Temples in Trichy on our list? Any other famous Trichy Temples than our recommendation that you think is a must-visit? Let us know in the comments!

If you think there’s something we missed out, let us know in the comments below!

Feel free to visit www.tamilnadutourism.com now and make an online chat with our holiday experts to make your own customized tour packages at the best prices.