Temples To Visit In Tamilnadu During Karthigai Deepam Festival 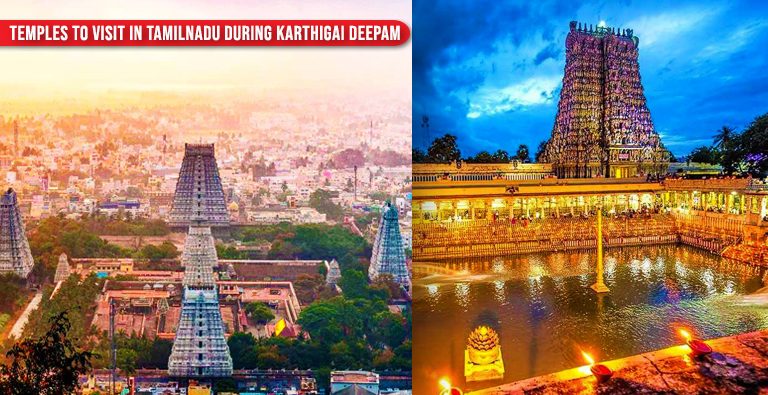 Temples To Visit In Tamilnadu During Karthigai Deepam Festival

Here comes the Festival of Lamps “ the eve of Karthigai Deepam”, one of the most famous and auspicious festivals in South India. This year 2019, The Karthiga Deepam Festival is being commemorated on the 10th of December. Behold the oil lanterns adorning every nook and corner of South India especially Tamilnadu. Lamps lit with oil are a symbol of holiness in Indian culture. To please the Gods Goddesses every household is decorated with flowers and beautifies with numerous lamps. It’s surely a sight to behold the city on the night of Karthigai.

Karthigai Deepam Festival is celebrated in all parts of Tamil Nadu. The festival falls on the Karthigai star during the Tamil month of Karthigai, i.e., between the mid of November and December. The celebration of Lighting Festival and Earthen Lamp, Karthigai symbolizes the eradication of ignorance and lighting up intelligence in mankind. Temples and houses wear a festive look during this festival. Sweets, delicacies, and crackers make the festival more wonderful.

Though the Karthigai Deepam Festival is celebrated across all regions of Tamil Nadu, the following are the few temples where the festival and celebrations are at its peak drawing thousands of devotees and tourists.

On every full moon, tens of thousands of pilgrims worship the Arunachaleswarar by circumambulating the sacred Arunachala hill by barefoot. The circumambulation covers a distance of 14 kilometers (8.7 mi) and is referred to as Girivalam. According to Hindu legend, the walk removes sins, fulfills desires and helps achieve freedom from the cycle of birth and rebirth.

The Maha Karthigai Deepam which is lit on the top of the Thiruvannamalai hills is considered to be the rarest sight to behold in one’s life. This Deepam is said to be lit with thousands of kilograms of ghee and tons of thread bundles. Ghee and camphor are used to light the huge fire to set up a connection to God directly. The most exciting and sacred moments of Karthikai Deepam in Thiruvannamalai is at around 6 o’clock in the evening, the lamp atop the hill is lit which is visible across several kilometers radius. Lakhs of devotees assemble to witness this mega event when the Lord’s presence is felt in the form of fire.

Thiruparankundram Murugan Temple or Subramanya Swamy Temple is one of the Aarupadaiveedu temples(Six Abodes of Murugan) dedicated to Lord Muruga and is just 9 km away from Madurai city. The idol of Lord Murugan is carved in such a way that Lord Muruga appears with a pleasant smiling face giving darshan to the devotees. According to legend, this is the place where Lord Murugan got married to one of his consort Deivayanai, who was the daughter of Lord Indira. Apart from Lord Muruga, there are other Gods like Vinayaka, Shiva, Vishnu and Durga, and the uniqueness being Lord Shiva and Lord Vishnu facing each other which cannot be seen anywhere.

Karthigai Deepam festival is one of the prominent festivals which is celebrated in a grand manner during the Tamil month of Karthigai. A Deepam will lit in the sanctum sanctorum in the evening after which the ‘Mahadeepam’ was lit on the top of the hill. Every household at this region light lamps after having a glimpse of the Karthigai Maha Deepam at Thiruparankundram hills. Special Abhishekams and Poojas were performed during this auspicious day at the temple to mark the Karthigai Deepam Festival. Passionate devotees circumvallate the Thiruparankundram hills after this grand event.

The main feature of this temple is the rock-cut architecture dating back to the rule of the Pandyas during the 6th century. Three major festivals are held yearly at this temple, of which the Kantha Sashti festival during the Tamil month of Aippasi (October – November) being the most prominent.

Palani Dhandayuthapani Swami Temple is also one of the Six Abodes of Murugan and considered to be the most prominent abodes of Muruga. This temple is hailed as the most eminent Murugan temple in India which is located on a single hillock in the city of Palani in the Dindigul district of Tamilnadu state. Karthigai Deepam Festival is also one of the prominent festivals celebrated each year. More than thousands of devotees from all over the world visit this precious shrine and get drenched in the shower of blessings during Maha Karthigai.

The idol of the Lord Muruga in Palani was created and consecrated by a great sage Bogar(one of Hinduism’s eighteen great Siddhas), out of an amalgam of nine poisons or navapashanam. That is why this temple is very famous and powerful. Palani is one of the important commercial cities in Tamil Nadu, there are buses from all main cities to Palani and a few yards walk from the bus stand will lead to the temple.

Pazhamudhircholai Murugan Temple is again one of the Aarupadaiveedu temples of Lord Muruga( Six Abodes of Murugan ). This temple is located at a distance of about 21 km from Madurai city which is close to Azhagar Kovil. This temple is situated on top of a hill in between a dense forest which adds beauty to the place. This is said to be the forest where the other consort of Lord Muruga, Valli had lived. This is also said to be the place where the great Tamil poetess and saint Avvaiyar was tested by Lord Muruga who made her realize that there is no limit for gaining knowledge and it is bountiful. This temple attracts plenty of devotees and tourists with the evergreen environment that surrounds the temple.

This is the one and only temple of Lord Muruga’s Arupadaiveedu where he graces the devotees with both his consorts Devaiyani and Valli. Being a Lord Murugan shrine this temple also commemorates the Karthigai Deepam Festival in a grand manner. People throng here on the eve of Karthigai to seek the immense blessing of Lord Muruga on his birth star day. There would special poojas and anointment to the Moolavar (Lord Muruga).

Lord Muruga is worshiped primarily in many countries especially in Sri Lanka, all over India, Mauritius, Philippines, Indonesia, Malaysia, and Singapore.

If you wish to be one among our happy customers, don’t miss out on the chance of collecting the memorable historical stories behind the Arupadaiveedu temples from the divine destinations offered by Tamilnadu Tourism.

Kanchipuram is another prominent destination where you can land up to witness the festival celebrated at Ekambareswarar Temple. One of the Pancha Bootha Sthalas, Ekambareswarar temple represents Earth, where the presiding deity is Lord Shiva. The lights lit up on the long compound wall of the temple makes the entire area transformed magically. The traditional poojas and rituals add up to the beauty drawing huge crowds to witness the festivities.

Thayumanavar Swami Temple or Ucchi Pillayar Temple is located in the rock fort complex built by the Pallavas in the 6th century atop a hillock in the city of Tiruchirappalli, India. The presiding deity is Lord Shiva in the form of Lingam, graces along with his consort Mattuvar Kuzhalammai. This temple is at the heart of Trichy city giving a spectacular view of the splendid town from atop. This temple is one of the temples in Tamilnadu that hoists the Maha Karthigai Deepam on the eve of Maha Karthigai.

Every year the giant lamp is lit mounted on a 30 ft metal pillar and spreads the message of glory throughout the city. The whole city glitters in the warmth of this giant lamp and praise the glory of the Almighty. For lighting, this mega Deepam about 1000 liters of ‘iluppai’ (Mahua Oil), sesame oil, and ghee are been used. And 300 m long wick made of cotton is been dipped in the mixture for about a week prior to the lighting of the lamp. Once the colossal lamp is lit it burns ceaselessly for about three days. To witness these rarest sight people from across the city throng at Thayumanavar Swamy temple.

Though Srirangam Sri Ranganathaswamy Temple is a Vishnu temple, this temple is also celebrating the Karthigai Deepam festival in a grand manner.

Srirangam Sri Ranganathaswamy temple is revered as the First of 108 Dhivya Desams as per the holy canons of Sri Vaishnavism and is one of the most popular temples in the world. With Lord Vishnu in the reclining posture as Sri Ranganathar, the temple draws tourists and devotees from all corners of the country and globe. With a series of festivals celebrated in this temple, Karthigai Deepam is one of the very few significant occasions marked in the religious codifications.

Karthigai Deepam is the day admired as the Birthdate of Thirumangai Azhwar, one of the Twelve Saints of Vaishnavism. It is also the day when the Adhyayana Uthsavam is conducted in the temple premises. The temple and the regions around become ready for the three days’ festival of Karthigai Deepam with decorations adorning the temples and houses. A huge number of devotees gather at the temple premises to worship the processional deities and the decorations of the temple.

Chokkapanai is one prominent event of this Karthigai Deepam festival in this temple. The trunk of the palm tree is hollowed and filled with easily combustible materials. The trunk is lit and the event symbolizes to destroy the evil and welcome the light spreading around.

Madurai Meenakshi Amman temple is another prominent location where the Karthigai Deepam festival is celebrated in a grand manner. One of the grandest temples in India at the oldest South Indian town Madurai is the Meenakshi Amman temple. The sprawling campus and the vibrant history of this temple with its spectacular figurines and splendid architecture makes this temple an awe-inspiring one.

The Karthigai Deepam festival celebrated in this temple is a very prominent one when the processional deities of Goddess Meenakshi Amman and Lord Sundareswarar are taken around the temple, witnessed by thousands of devotees. Witnessing the gorgeous lighting decorations is an enchanting experience. Here also, Chokkapanai is a joyful event witnessed by many.

As per Puranas and astrology, Karthigai is the birth star of Lord Muruga, and worshipping him on this particular day is said to be very auspicious and prosperous. The Maha Karthigai that falls on the month of mid-November or December is said to be more powerful. On this particular day, all Muruga shrines and Shiva temples at Tamilnadu commemorate it in a grand manner.

The rest of the places in Tamil Nadu also celebrate Karthigai Deepam equally with special prayers offered at temples and home.

Visit Tamilnadu during Thiru Karthigai and feel the blissful ambiance. Be a part of this auspicious event and get drenched in the blessing shower of Lord Shiva & Lord Muruga and get a deeper insight into the traditions of South India.

Tamilnadu Tourism offers many customized tour packages that attract a large number of tourists from across the world.

Enjoy a comfortable trip and experience the spiritual journey with us.