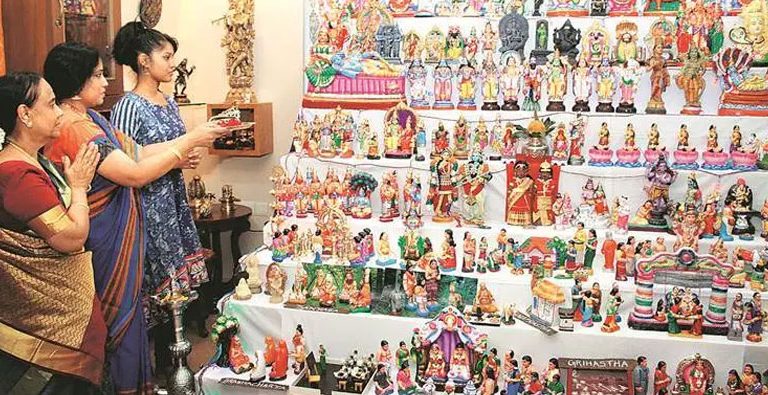 Navaratri Festival – one of the vibrant festivals in India

Colors, fun, harmonies, joy, sweets, blessings, fancy attire, fabulous feasts all coalesce with the Indian festivals and make them a par less one. Forget yourself amidst the cheerful vibe of Indian fete and relish it joyous beauty. Indians give a break to their routine and groom their tradition by commemorating lots of festivals and fares. One such most important festival, which is celebrated throughout the Indian subcontinent is the Navarathiri festival. Navratri in Tamil Nadu is equally a grand festival as it is in other parts of the country. The making of dolls of Golu/Kolu for display on wooden steps marks the celebration as a bit different from the rest of India. In Tamilnadu, we can witness the Navaratri festival in each and every temple and home in a unique way of rituals and celebration.

Navarathiri is one of the most vibrant festivals in India. During these nine days, the whole nation turns out to be colorful and fun-filled. Navarathiri in Hindi means nine, as per the name this festival is celebrated for nine nights in the month of September. Navratri occurs over 9 days during the month of Ashvin, or Ashvina (September–October). It often ends with the Dussehra (also known as Vijayadashami). This festival is dedicated to nine Goddesses ( nine forms of Shakthi). The best part of the Navarathiri festival is the fabulous presentation of Golu (Showcase of idols of Hindu gods), in all temples and many households.

Navarathiri festival is also famous for the yummy snacks that are prepared in every household and temples. These snacks are mainly made of pulses. And in the evenings there would be grand celebrations including music concerts, and traditional dances at temples and every street of India. Apart from dolls, snacks, dance and drama, the Navarathri festival brings everyone together irrespective of caste, religion and creed. The Navarathiri Festival is commemorated from September 29 to October 8 in 2019 and in 2020 it will begin on Saturday, 17 October and ends on Sunday, 25 October.

Saraswati Puja is also performed on the 9th day of the festivities where books and musical instruments are worshipped and are kept at the fore of Kolu, followed by dwelling into the spiritual music. The last day of this famous festival of Tamil Nadu is known as Vijayadashami where as per the rituals, one of the idols is laid to rest from the embellished Kolu toys signifying the end of Navratri.

Witness the outpouring devotion of thousands of worshippers in this 9 days festival which is celebrated in the Tamilnadu Temples. On this special occasion plan a festival tour to the famous temples in Tamilnadu such as Kanchi Kamakshi Amman Temple, Madurai Meenakshi Amman Temple, Samayapuram Mariamman Temple, Mutharamman Temple in Kulasekharapattinam, Woraiyur Vekkali Amman Temple and many other famous Amman temples to witness this colourful and vibrant festival in your life.

Significance of the nine days:

The first day of the festival celebrates the various aspects of Goddess Sakthi and her impeccable power.

The second day of Navaratri is dedicated to Goddess Durga. On this day, she took stunningly graces in the form of ‘Brahmacharini’. Worshipping her on this day will purify all our deadly deeds and restore us with harmony.

The third day of Navarathiri, goddess Durga graces in the form of Chandraghanta. Be more beautiful and brave by worshipping Chandraghanta.

The fourth day of Navarathiri is dedicated to goddess Kushmanda. She is the creator of the whole universe with just her laugh.

The fifth day of the Navarathiri festival is dedicated to Goddess Skand Matha, the lord of Power and victory. Bowing down at her feet and worshiping her with full heartwill bring us all victory.

The sixth day of the Navarathri festival is dedicated to Maa Katyayani. This avatar of Goddess Shakthi stayed in the Asharam of Katyayan and indulged in severe penance. This form of Goddess graces astride a lion with three eyes and four arms. She glitters in golden complexion with a warm smile.

The seventh day of the Navarathri festival celebrates the Devi Kalarati. Devi Kalarati is the ferocious form of Goddess Shakthi. She graces with four hands, clutching a cleaver and torch. She is worshipped as the destroyer of darkness and ignorance.

The ninth day is for Goddess Maha Siddhidatri. Graces on a lotus flower, Goddess Siddhidatri is the possessor of 26 different wishes to grant her devotees. Maa Siddhidatri’s famous pilgrim center is located in Nanda Parvat in the Himalayas.

Worship these nine forms of Goddess Maha Durga with your kith and kin and liberate yourself from all sins and ill luck.

Tamilnadu people celebrate Navarathiri in a grand manner. Most of the houses in Tamilnadu will display golu for nine continuous days. People from the neighborhood participate in this golu and sing beautiful songs on Goddess Durga. At the end of the day, all the visitors will be served with hot snacks and gifts. Nowadays people are displaying golu with certain themes, which are a great sight to behold. Celebrations in Mutharamman Temple in Kulasekharapattinam is a unique one comparing to other Navaratri celebrations. Devotees visit the temple in an avatar of their choice and they could be dressed as kings or beggars, monkeys or demons, but the more popular are different forms of the Devi.

The Navaratri and Vijayadasami celebrations at the Mutharamman Temple in Kulasekharapattinam, a coastal town in Tamil Nadu, are popular but not so well known. Located 20 km from Tiruchendur in Tuticorin district, this quaint village comes alive during the 10-day Navaratri festival. Over 15 – 16 lakh devotees visit this temple every year.

Jammu & Kashmir Vaisho Devi temple is known for its grand Navarathiri celebration. During these nine days, the temple is thronged by millions of devotees from various parts of the region. Especially visiting this temple during navarathi festival is believed to be very auspicious.

People of Gujarat celebrate the Navaratri festival in a pompous way. The girls adorn themselves with ghagra cholis and dance the Garbha dance merrily. Boys also get dresses in Kurta pajamas and participate in the dance.

West Bengal strands first in celebrating the Navarathri festival. To enjoy the utmost fervor of the Navarathiri festival one must visit west Bengal. Special stages are set up in different parts of the state. These pandals are decorated elaborately and meticulously, each pandal holds a colossal statue of Goddess Durga. Special pujas and prayers are done to this idol, and on the ninth day of the festival, the idols of Durga are taken in procession accompanied by people dancing and singing and finally immersed in the sea.

On this special festival occasions, Tamilnadu Tourism offers various festival Tour Packages and customized Temple Tour Packages for you to indulge in the colourful and vibrant festivals of incredible India.

Mark your calendar and join us to witness the joyful celebrations of the Dussehra/Vijayadasami Festival and get the free itinerary quotes.

Enquire now and get the best deals and offers according to your itinerary only with Tamilnadu Tourism.