7 must visit temples in Kanchipuram 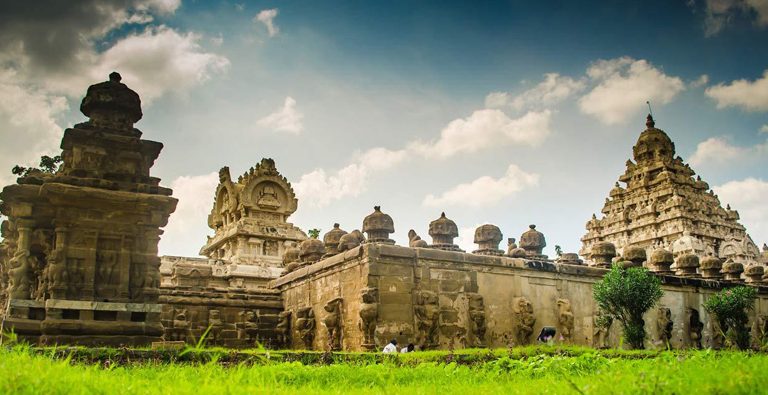 7 must visit temples in Kanchipuram

Kanchipuram – “The City of Thousand Temples”, is a delightfully enchanting marvel dotted with a thousand temples that bear testimony to the excellent craftsmanship of sculptors and artisans of ancient South India. Matchless in its beauty and enigmatic in its architecture, the temples in Kanchipuram are absolute wonders that eyes have ever beheld. Deemed as the second holiest city after Varanasi, Kanchipuram is a much-sought-after pilgrimage site for Hindu devotees. Besides its mesmerizing temples, the beautiful and elegant Kanchipuram silk sarees, enchanting landscapes, festivals, dynamic culture and exotic cuisines makes Kanchipuram amazingly incredible.

Kanchipuram the “city of silk” in Tamil Nadu is another highlight of Kanchipuram, which is75 km away from Chennai. Kanchipuram is also the synonym of Silk Sarees where this heritage city is worldwide famous for its impeccable glorious silk sarees. This holy city is well connected by road and rail and the possible nearest airport is in Chennai.

Tamilnadu Tourism offers you the exclusive spiritual tour package to explore the most popular and heritage temples in Kanchipuram at the best affordable price.

Here, we have come up with the list of top 7 must-visit temples in Kanchipuram which makes you to visit these beautiful holy pilgrimages in this city and also take you to different places which are near Kanchipuram. Have a look at it and plan a Temple Tour in Kanchipuram and other parts of Tamilnadu.

There are many Amman temples in and around Tamilnadu, but the most famous and powerful temple is Sir Kamakshi Amman temple at Kanchipuram. This temple sprawls across an area of 5 acres and is the most beautiful Amman temple next to Madurai Meenakshi Amman. The very first sight of this vast temple will spur our devotional spirit. There are four towers (gopuram) facing east, west, south and north. The inner tower of Kamatchi shrine is cladded fully with gold and it’s a spectacular sight to see this sparkling golden tower.

Sri Kamatchi Amman has devotees from all over the world, the temple is always found crowded and is engaged in one or other celebrations. The sacred tank (theppakulam) is located at the center and adds more beauty to the temple. Devotees after worshipping Goddess Kamatchi, sits beside the tank and enjoy the incredible ambiance.

The architecture of this temple is purely Dravidian and is believed to be 1000 years old. Even though it’s an Amman shrine, other Hindu gods are also found. There are separate sanctums for Goddess Lakshmi, Lord Vinayaka, Lord Ayyappan, Lord Kalabhairavar, Goddess Mahisha Sura Marthini, Lord Shiva, Lord Muruga and the Kalvar Perumal (one of the 108 divya desa Perumal).

Ekambareshwarar temple is one of the largest temples in Kanchipuram. Lord Shiva as the presiding deity in the form of Prithvilingam in this temple.

The hundred pillars hall inside the temple is one of the remarkable features, and there are spacious corridors, Colossal Gopuram, and importantly this temple having a 3,500-year-old mango tree.

This temple is one of the most ancient temples in India. Dedicated to Lord Vishnu, this hoary temple’s glory has been sung by great scholars and eminent Vaishnava saints like Peyalwar, Boothathazhwar, Thirumangai Azhwar, Acharya Sri Ramanuja, Thirukachi Nambi and Sri Manavala Mamunigal. The 100 pillared hall that features commendable sculptures depicting Ramayana and Mahabaratha highlights the most striking feature of Sri Varadaraja Perumal Temple.

The presiding deity is Lord Varadharajar Perumal. The most significant feature of this temple is the colossal Athivarathar Perumal statue which is brought out once in every 40 years. Recently the raising of the Athi Varathar ceremony happened in an unexpectedly grand way at Kanchipuram. Visiting this temple is very auspicious and blesses one with all good fortune.

To know more about the Kanchipuram Athivaradhar Festival 2019, (click here…)

Though the ornamentation is not very elaborate, the unique structure of the shrine amazes the onlookers. The temple is constructed in red sandstone and adorned with frescos. This temple is one of the most prominent tourist attractions of the city.

This Divyadesam is called as Vaikunda Perumal Temple, which was built by the Pallava Emperors who also built the Kailasanathar Temple at Kanchipuram. The huge pillars with Lion head effigies adorn the corridors of the temple. Special poojas are done to Lord Venkatesha during Vaikunda Ekadesi, Thirupalli Eluchi, Margalai ustav and etc. This temple is considered the second-oldest extant temples in Kanchipuram after the Kailasanthar temple.

Sri Subramaniya Swami temple or Kumarakottam temple is one of the notable temples in Kanchipuram. This small serene shrine is situated in the center of the city. Sri Kumarakottam temple is one of India’s seven “Moksha-puris” or sacred cities where salvation may be obtained. This temple is famous for the ‘Soma Skantha’ posture that is Lord Shiva and Goddess Parvathi are seated with Lord Muruga on their lap.

The location of this temple is between Ekambareshwarar temple and Kanchi Kamakshi Amman Temple which reminds the devotees about the Somaskandha form in which Lord Muruga sits between goddesses Parvati and Lord Parameswar. Festivals like Karthigai and Thaipoosam are celebrated grandly and the popular festival held here is Kandha Shashti in November.

Stories say that the legend Krishna is the Pandavas special emissary to Dhooryothana. After the thirteen years of Pandavas exile, he asked him to give the share of land that belonged to Pandavas, but he refused to do so and planned to kill Krishna by inviting for a dinner. Krishna who knew about his dubious act revealed his gigantic form and set Dooryothana in aghast. After this Pandavas gained their share of land and that is why Krishna is named as Pandava Dhooda.

The lord here is in Vishwapadhayoga form where he touches his feet to the ground, hence revolving around this temple with all our body touching the ground will strengthen the muscles and nerves in the body. Rohini starers are believed to have a bright future and great fortune if they visit this temple during Ashtami and Krishna Jayanthi. This temple is also one of the prominent temples to see in Kanchipuram.

Other than temples and monuments, this lovely city is known for its splendid hand woven silk sarees. These silk sarees have some charismatic power that makes every woman fall for it and so it is also called as “Silk City”.

There are hundreds of silk shops at Kanchipuram, where we can get all kinds of silk dresses. There are also shops where we can sell our worn-out silk dresses for a handsome amount. Every woman will glimmer in these beautiful sarees. One can purchase saree and other garments that are handwoven by the village artisans and every penny spent on these gorgeous dresses is worthy.

There are also many Khadi shops at Kanchipuram, which are best for buying souvenirs and genuine products. Another highlight of Kanchipuram is palatial cuisine, which reflects the taste of typical South India cuisine.

Brahmotsavam festival is celebrated in the month of May at Varadaraja Perumal temple at Kanchipuram. This festive is commemorated on an auspicious day of Vaishakh Poornima. This is a ten days long ustav in which Lord Vardaraja along with his consorts Sri Devi and Bhoodevi is given a ceremonial bath and adorned meticulously. Every evening the beautified effigies of Lord Varadaraja Perumal and his consorts are carried out in a grand procession.

Garudotsavam is a part of ten days festival at Sri Vaikunda Perumal temple in Kanchipuram. This festival is also known as the ‘Garuda Sevai Festival’. One this occasion Deities from nearby temples join the Utsav and participate in the procession. Hundreds of devotees throng at this temple to seek the blessings of al Gods.

The colossal grand temple chariots are known as ‘Ther’ is adorned with beautiful flowers and colorful papers. This car dragging festival is celebrated on the 9th day of the ten-day Brahmotsava festival at Lord Varadaraja Perumal temple. Lots of devotees volunteer to drag this mammoth chariots.

This festival is celebrated once in 4 years on the top of the Athigiri Mountains. On this day the effigy of Lord Varadaraja Perumal reclining on his Adhisesha( five faced serpents) is brought out on the hilltop only for 48 hours.

The Naynar Uryavan is celebrated to revere the 63 Naynar Saints when the idol of the Lord Ekamranath is taken around the city in a marvelous procession.

How to get there:

Kanchipuram is located at the distance of 76 km from Chennai. It can be easily reached from cities like Chennai, Villupuram, Thiruvallur and Vellore. Inside the city, we can get lots of Share autos which take us to the important destinations of the city at a very reasonable price.

Bus:-
Transport in Kanchipuram is active throughout twenty-four-seven and buses to all important cities are available.

Air:-
There is no airport in Kanchipuram, and the nearest airport is in Chennai, which may take two hours to reach.

Railway:-
Kanchipuram is well connected by rail and has a railway station inside the city. Trains from Chennai, Madurai and Trichy arrive often.

Never miss to visit Kanchipuram while your trip to Tamilnadu. This place is apt for both pilgrims and shoppers.

Tamilnadu Pilgrimage tour package will be perfect to explore all the famous temples at Tamilnadu especially in Kanchipuram. Tamilnadu Tourism offers your best tours package to Tamilnadu.

Enquire now and grab the best deals and offers only at Tamilnadu Tourism.

For more details, feel free to visit www.tamilnadutourism.com and get the free quotes for your itinerary.