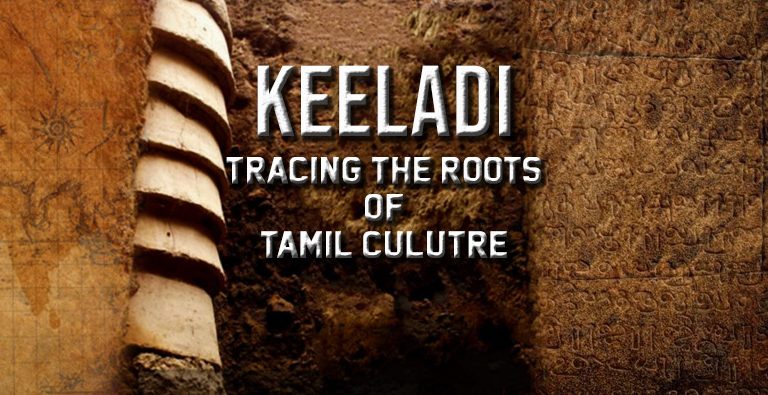 Keeladi Cultural period as follows: 3rd century BC to 12th century BC!

Archaeological excavations are a never-ending journey of searching for the ancestors of our ancestors. Modern tools began to originate from small artifacts, wheels and artifacts discovered by the ancestors became the foundation of human development. The evolution of man can be predicted by properly classifying the identified archaeological sites.

Keeladi this name has scored a high sensation in the present scenario. You may wonder why this Keeladi excavation is now been talked by many, and what’s the reason behind its popularity. If I say this Keeladi excavation is going to rewrite the history, would you believe it? You have to because the fifth excavation results at Keeladi had been announced officially and this has brought incredible findings that can possibly rewrite the pages of History.

Artefacts which are found in excavations carried out at Keeladi have confirmed a possible link between the scripts of the Indus Valley Civilisation and Tamil Brahmi, which is said to be the precursor to modern Tamil. Yet another major discovery states that the Vaigai riverbed had an urban civilization that was cotemporary to the Gangetic plain civilization.

Where is this village?

Keeladi (also spelled as Keezhadi) is a quaint village located at a distance of 13 km from Madurai in the Sivagangai district. Draped in coconut grooves, this village is been allotted for excavation by the archaeology department to find more facts on the Vaigai riverbed civilization. This is a large-scale excavation carried out in Tamil Nadu after the Adichanallur archaeological site. The settlement lies on the bank of the Vaigai River and it reflects the ancient culture of Tamils.

With the material underneath, the culture of the Tamils ​​is thought to be 2,600 years old.

Though this excavation had been started in the year 2015, currently it has reached the limelight. This is because of the official declaration of the findings and carbon results. Now Keeladi is in the phase of the fifth stage of excavation, under the surveillance of the Tamilnadu Archaeology department.

The link between Indus scrip and Tamil Brahmi:

Through the tireless excavation at Keeladi archaeologist have found many particles, artifacts, and scriptures that belonged to the Sangam period. The scripts found at Keeladi shows a remarkable similarity with the scripts that were found in Indus civilization. The Indus Valley civilization which is located in the north-western part of India is said to have resided between 5,000 BCE and 1,500 BCE. The graffiti discovers in Keeladi dates back to 580 BCE and it closely resembles the Indus script. So this creates a link between Indus script and Tamil Brahmi. So far about 1000 different marks have been found and many of the marks are similar to the Indus script.

So these findings give various perspectives in finding the oldest civilization. One view is that after the collapse of the Indus valley civilization, the people from there must have moved to the South and have settled here. While there is a contrary view which says that the Vaigai river civilization must have been the ancestor one, from which a part of people has migrated to the North.

The recent genetic studies on these remains from both the place report that the Indus people may not have had what’s known as the ‘Steppe Pastoralist’ DNA, but they may be of Dravidian origin, which is a great revelation in the history.

A much older Sangam age

Tamilnadu Archaeological department has another mind-blowing discovery, which have made the world look back. Through their findings, they have revealed the fact that urban civilization was thriving on the banks of the Vaigai River in Tamil Nadu in 6th Century BCE, around 2500 years ago. So the Sangam age which we know had begun much earlier ie from 300 BC and this revelation rewrites perception of Indian history so far.

So far six-carbon dating samples have been sent to Beta Analytic Lab, Miami, Florida, U.S., for Accelerator Mass Spectrometry (AMS) dating. In which one of the articles has been dated back to 6th century BC. Pottery specimens from Keeladi sent to the Earth Science Department of Pisa University, Italy, through the Vellore Institute of Technology for mineral analysis, states that they were made of raw minerals found some 2500 years ago. These findings clearly state that Keeladi had a civilization much older and much civilized than any other Indo civilization.

It surely a moment of pride for Tamil people, as the discovery at Keeladi had revealed the fact that their ancestors have attained literacy or learned the art of writing as early as the 6th century BCE. The recent scientific dates obtained for Keeladi findings pushback the date of Tamil-Brahmi to another century i.e. 6th century BCE. And lots of potsherds have been collected at the site which bore names like Kudhiranadhan and Aadhan written in Tamil Brahmi script.

And the deeper excavation has led to the discovery of industries. Till now about 56 Tamil Brahmi inscribed potsherd, 10 spindle whorls, 20 sharply pinpointed bone tip tools used for design creations, hanging stones of the yarn, terracotta spheres, copper needle and earthen vessels to hold liquid have been recovered. This clearly attests that industries like pottery and weaving had been functioned.

So far they have found much unique gaming equipment, gold Jewellery, copper vessels, and knives have been discovered. Even some parts of excavation have revealed toilets like structures. So people must have used toilets in earlier days. This shows how civilized and hygienic our ancestors were.

About 70 samples of Skelton fragments of faunal remains have been sent to Deccan Collect, Post Graduate and Research Institute in Pune for analysis, and species such as cow and ox, buffalo, sheep, goat, Nilgai, blackbuck, wild boar and peacock were identified. Through this, it is evident that people of Keeladi civilization had indulged in agriculture and cattle breeding. And the cut marks on other animals such as the antelope, goat and wild boar suggest that they were consumed.

Excavation at Agaram and Manalur

After these incredible findings, the Tamilnadu Archeology department had filed a proposal to expand their excavation in the nearby villages including Agaram and Manalur.

According to expert’s views, Keeladi must have been the industrial area, Agaram has been burial ground, and Manalur must be the residential site. By excavating in all these sites, a lot more unimaginable facts can be revealed.

Explore this historical city and explore Tamil civilization while your visit to Madurai. Tamilnadu Tourism offers the best Tamilnadu tour itineraries in which you can explore places like Keeladi, Madurai and many historic regions.

Plan your trip right now and get ready to explore the ancient Tamilnadu.

For more details and tour bookings, feel free to visit www.tamilnadutourism.com and get free quotes for your itineraries.

The oldest kingdom from where human civilization began on the eastern side of the planet is started from the ancient Madurai. This ancient city is the last remaining mega-evidence of a glorious past of the oldest Kingdom in the world.

This temple city is one of the oldest cities in India but is it the oldest city in India? How well was Madurai connected to the rest of the world?

(Click here…) to know about “Madurai – The Oldest Living City in the World”.