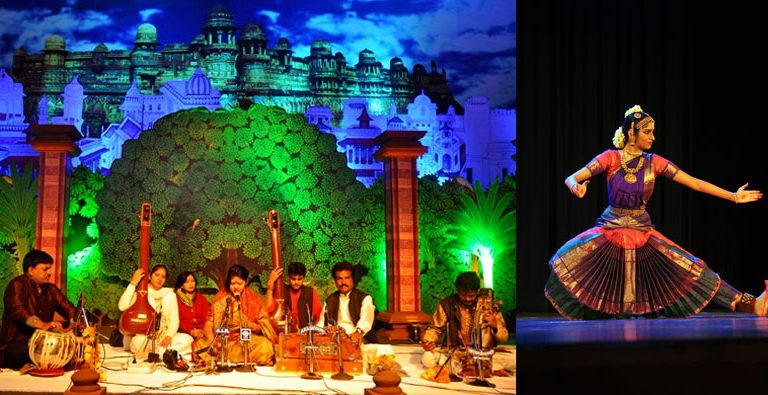 Chennai the capital of Tamilnadu is a metropolitan city that holds its culture and tradition alive through its varied festivals and fares. Chennai Music and dance festival is one such cultural fest that showcases most captivating dances and music concerts.

The Chennai Dance & Music Festival is a popular festival in South India and it is truly dedicated to the South Indian Classical music and dance, held during mid-December to mid-January in the capital city of Chennai. People from all over South India come to Chennai during this time to be a part of this celebration of Indian music and dance.

This cultural infusion casts a grand show of budding talents and famous artist’s performances. Get awestruck by the Blissfull and rejuvenating performances of varied artists. It is a paradise for music and dance admirers. People from various parts of the country throng here to relish and take part in this lovely event.

Agenda of the Festival:

Chennai Music and Dance festival origin date back to the year 1927. Initially known as the Margazhi festival and was commemorated to honor the anniversary of Madras Music Academy, this festival went viral and now most of the music schools all across the country take part in this event making it a cultural extravaganza.

The concerts and programs are held throughout the city at various venues including heritage buildings, auditoriums, temples and etc. Just taking part in this cultural event is considered to be very prestigious. This year 2020, the Chennai Music and Dance festival fall on 1st January. The festival lasts for a month and about 300 concerts are hoisted across the city at various venues. The tickets for the event can be bought from the tourism office of Chennai.

Exclusive for Carnatic Music and Dance:

Though Tamilnadu is known for many things, it is best known for the Carnatic Music and Dance. This is the place that reared this incredible skill from time immemorial. The Chennai city takes great pride in being the venue of the Chennai Music and dance festival.

Artists from various parts of the country perform their versatile skills at different venues throughout Chennai. This festival is especially dedicated to the classical form of South Indian music and dance. Every year this festival takes place for about a month, which attracts more than 2000 artists.

What can we experience?

A Month-long festival of Chennai Music and Dancefest flaunts the blend of all arts. Especially for those who participate in the Carnatic music and classical South Indian dance forms, this is the perfect platform to showcase their talents. Under one roof we can experience everything from Vocalists to instrumentalists.

Various performances that include solo vocal, group orchestras, Barathanatyam, Kuchupudi, Kathak, Fusion and lot more can be witnessed. The music ranges from Tamil, Telugu and Kannada languages while the instruments include mridangam, flute, veena, nathaswaram and much more.

Get enthralled by the plethora of performance from an artist and forget yourself in their delicate intricate moves.

From old to modern and from nature to architecture, Chennai owns a variety of places to impress and entertain tourists. With an old name of Madras or Madrasapattinam in mind, one can explore lots of amazing places to visit at Chennai some of them are:

Being the capital of Tamilnadu Chennai is well connected by all three modes of transport Rail, Air, and road

By Air: Chennai International Airport in Meenambakam is at a distance of 7km from the city. The airport has both domestic and international terminals. So Chennai can be reached hassle-free.

By Rail: The city’s major railway junctions are Puratchi Thalaivar Dr. MGR Central railway station and Chennai Egmore. Both have frequented by trains that connect all parts of the country.

By Road: There are many bus services to and from Chennai which makes it easy to reach. The tourists can also reach Chennai through the car. The main bus station is at Koyambedu which is busy with busses from all parts of the state.

For this New Year enjoy the festival of Carnatic music and begin the year 2020 melange of classical music and dance.

Wait no more and book right now for the grand fest and give a great feast to your eyes and ears.

One thought on “Chennai Dance and Music Festival 2020”