Established in the year of 1967, the Point Calimere Wildlife sanctuary is situated in Tamil Nadu, India. It houses the famous bird sanctuary of Vedaranyam and the Talaignayar forests. 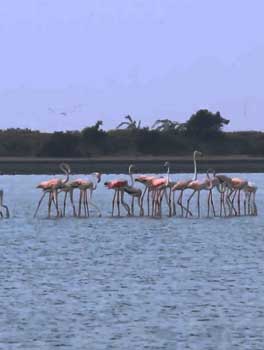 The forest is made up of dry evergreen trees and since it is located closer to the sea, it also consists of wet marshy lands and mangrove forests.

Point Calimere is known for its large sighting of our feathered friends from various parts of the globe. Some of these include gulls, teals, plovers, terns and stilts. You can also catch over thousands of flamingos at the same time here along with a number of blackbucks. Dolphins can be found here that allure visitors to Point Calimere.

Many boats in the sanctuary can take you to the sea where you can spot a number of avifauna. Among the animals found here, one can spot the spotted Deer, Chital and wild boars among many. But among all, the number of birds is the most impressive owing to the Vedaranyam sanctuary.