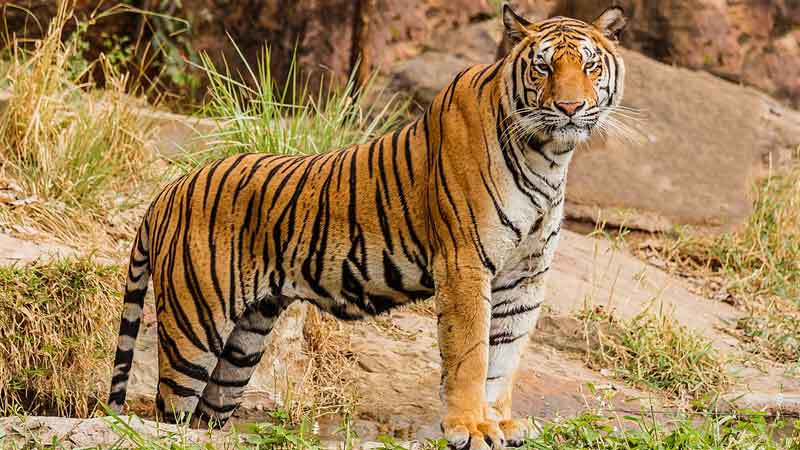 This reserve is a mixture of three main sanctuaries Kalakad Sanctuary and Mundanthurai Sanctuary and a part of Kanyakumari Sanctuary. It sprawls across an area of 895 Sq.KM. This Reserve has been identified as one among the Type-1 Tiger Conservation Units (TCU) and also classified as tropical moist evergreen forests.

This sanctuary is located in the midst of latitudes 80 25’ North to 80 53’ North, between longitude 770 10’ East and 770 35’ East, this sanctuary also forms a part of Agasthiyarmalai Biosphere Reserve. This sanctuary receives rainfall on both the monsoons and so it can be found greenish all time.

Mundanthurai is also a safe haven for more than 79 species including Tiger, Asian Elephant and Lion tailed Macaque. The co-predators of Tiger include wild-dog or Indian Dhole and Leopard.

Mundanthurai forest department takes immense steps in planting medicinal plants all around the area. So far they have planted medicinal trees including Hibiscus, Emblica, Pomagranade, Tulsi, Vilvam etc in 150 ha. They have also distributed 36000 plants to the public at free of cost. . Moreover about 4000 seedlings have been planted in Agasthiar Kani Settlement, Servalar Settlement, Mundanthurai Forest staff quarters, Kani school buildings and Servalar Government Hospital building.

KMTR is one among the 5 centers of plant diversity and endemism of India. It is considered as a richest conservative and so got the name “Super-hotspot”. The floral diversity in KMTR includes 448 endemic species, 58 Red- listed species, 601 Medicinal species, and 90 species of wild relatives of the cultivated plants. There are 3 Gymnosperms and 156 Pteridophytes. The faunal diversity includes 47 species of fish, 47 species of amphibians, 89 species of reptiles, 337 species of Birds and 79 species of Mammals

There are bus service from Tirunelveli, Thirukarangudi, and Kalakad. The nearest railway station is at Tirunelveli 50 kms. Airport service is available at Madurai 200 kms from Mundanthurai.