Suruli falls is one of the famous falls in Tamilnadu, known for its peerless beauty. This falls is situated near Theni district and is visited by many tourists every year. This falls is a two-step falls, first section falling from the height of 150 feet and flows down as a small pool, later cascading at the height of 40 feet 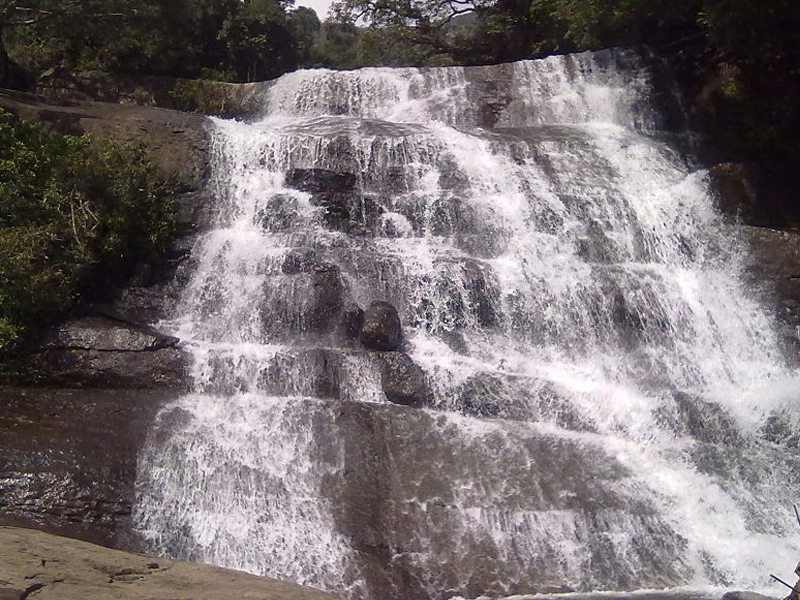 This incredible falls finds its place in ancient Tamil epic Silapathigaram and is been praised by many poets. This falls too has many curative properties. Near Suruli Falls are 5 caves which represent Indian rock-cut architecture of the 11th Century

Theni district is a beautiful place to spend your holidays at peace and tranquility. This falls adds more beauty of Theni district. As it is one of the famous waterfalls in Tamilnadu, it is well maintained and basic facilities such as bathing spot, railings, dressing room, rest room, garbage and other primary facilities are available at his falls. Best part of this falls is it is tourist friendly and is safe for children to bath. The rocks are not very slippery and the water is shallow. So it is very safe for elderly people and children.

The Tamilnadu government celebrated summer festival at this falls every year, which attracts lots of tourists.

Other places to visit:

Suruli falls is a part of Pothigai mala. Pothigai malai is considered to be the most sacred hill next to Mount Kilash. It is even know as Mt. Kailash of South, the similarities between both the hills are evident and are praised by many saints.

This hill is also known as Agasthiyar hill, as this is the hill where Saint Agasthiyar stood to balance the world. It is even believed that he witnessed the celestial wedding of Lord Shiva and Goddess Parvathi from the top of this hill. So during full moon days lots and Lots of pilgrims from Himalayas visit this hill to seek the blessings of Saint Agasthiyar and Lord Shiva.

Just an 800 m above falls is the Kailasanadhar cave temple. This cave is a haven for saints and gurus to meditate, they also believe that many divine souls of Hindu saints dwell in this cave. Kailasanathar cave is connected with the Sathura Giri Mahalingam Kovil Cave.

There is also a story prevailing there, that saint Bogar made the Navapashanam ( nine medicinal herbs) statue from the medicinal herb grown at this hill. The Dargah at Suruli is an important worship place for some Muslims. This is named after Abubacker Masthan who lived around the 1630s in this area and is buried here.

Suruli falls is a famous destination in Tamilnadu, so buses are available from, Madurai, Dindugal, and Theni.