Nestled in the green hills is Ooty, the pictorial Queen of Hill Stations, one of the favorite summer retreats of people in South India, which is at an altitude of 2240 m. Orchards of pine, conifers and Eucalyptus trees and wattle lining the landscape denotes this hill station as a unique one and the most attracted one id the tunnel shaped lavender flowers in the sloping mountains. 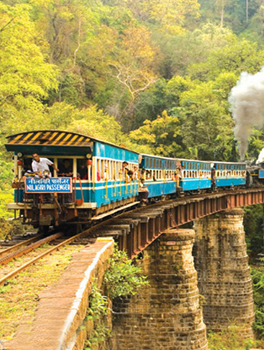 One can watch nature in its best form and splendor while trekking in Ooty. Ooty has many trek routes to offer.To get the true experience take a toy train ride to Ooty from Metupalayam, or from Ooty – Coonoor on the reverse route to enjoy the nature and the plains so closely and would give you a different and a thrilling experience to travel. Ooty is huddled in an a space generated by 04 royal hills like they Club hill, Dodabetta, snowdon and Elk hills.

One can watch the nature in best form however they differ in distance, topography and stature. Majestic hills are the fractions of regal Nilgiri range and a congregation for the Easter and Western Ghats.

Botanical gardens which is neatly maintained by the government and the Horticulture department. Offers varieties of flowers and manmade ponds and green pastures. Apt place for people who is passionate towards photography. This park is one of the best in India and has some rare collections and old age trees that have turned as hard core stones.

Pykara falls which is often mistook as Paradise on earth. This is one of the beautiful waterfall you can witness in Ooty and yet one of the dangerous place. One need to be careful while visiting the place since the restricted areas is very slippery.

Best way for an evening hang out will be Ooty Lake for taking a boat ride. An additional advantage is there are many shops that offer wide range of products and foods for the travelers visiting the lake. There are also games and entertainment elements for both kids and adults.

Dolphin Nose is a huge rock and the formation looks exactly like what it is named after, a dolphin's nose. Takes some effort to climb to the top of this rock outcropping, but the views are entirely mesmerizing. Gigantic ravines found both to the right and left of Dolphin's Nose. In one of the ravine's you can notice the beautiful Catherine Falls with its cascading stream several thousand meters below. In the other ravine, you can see where the Coonoor stream meets the Kotagiri stream. Both streams are associated within these two ravines that feeds the Bhavani River which is located a relatively short distance away opposite of the Dolphin's Nose.

Dodabetta peak which is the edge point and there lies the telescopic sight where tourist can have a panoramic view of the whole town and plains. Fresh carrots and peaches and rare kind of fruits are the best which you should not miss. Dodabetta peak is the highest known peak in the region of Ooty located 10 Kms away from the suburb of Ooty at an altitude of 2623 m height. Ooty located at the highest point the natural scenes can easily be captured in the camera and the hillock as well as the valley is indeed a great tourist attraction. The hilly regions of the open plain lands and Mysore too can be easily captured in the camera due to the highest point.

Sim's Park is a unique botanical garden established in 1874 by Mr. J.D. Sims and Major Murray. Naturally grown trees, and creepers, and shrubs are in the park as are many rare species of plants that have been brought in from a variety of places around the world. The park is situated in a deep ravine on the side of Coonoor and covers fifteen acres of great landscape. The well planned and laid out park has a beautiful sceneries and there is an annual fruit and vegetable show that is held in the park during summer.