Athi Varadhar 2019: A Grand Celebration Once in FORTY Years! 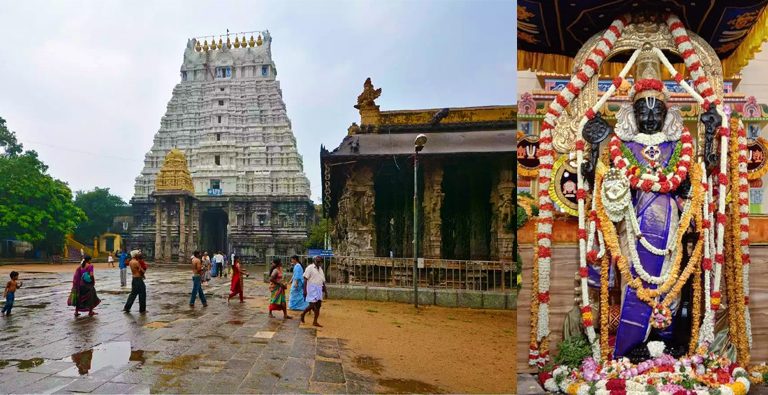 Athi Varadhar 2019: A Grand Celebration Once in FORTY Years!

Here comes the most awaited grand festival of Athi Varadhar Utsav2019, which happens once in every forty years. We all knew that “The city of Silk” Kanchipuram is world-renowned for its pure rich silk sarees, yet another feather in the hat of Kanchipuram is this 2000 years old Athi Varathar Temple. Tamilnadu Tourism offers and helps thousands of people all around the world to visit the Sri Devarajaswamy Temple in Kanchipuram to offer their prayers before the idol of Athi Varadar which is immersed back in the temple’s pond.

Here, we have come up with the complete guide about the Lord Athivaradar Festival which was held in Kanchipuram Varadharaja Perumal Temple.

Varadharaja Perumal Temple or Hastagiri or Attiyuran is a Hindu temple dedicated to Lord Vishnu located in the holy city of Kanchipuram, Tamil Nadu, India. This temple is one among the 108 Divya Desams of Lord Vishnu. The 100 pillared hall that features commendable sculptures depicting Ramayana and Mahabaratha highlights the most striking feature of Sri Varadaraja Perumal Temple.

Being a very old temple, it is revered greatly and visited by thousands of devotees every day. This particular festival “reappearance of Lord Athi Varathar” is commemorated in an awe-inspiring manner. People from all over India and even from the overseas throng at this temple during these 48 days of the festival to seek the immense blessing of Lord Athi Varathar in Kanchipuram.

This temple is one of huge Vishnu temples like Srirangam Ranganathar temple in Tamil Nadu, covering an area of 23-acre (93,000 m2) of prime land. It was first built in 1053 AD by the great Chola rulers and later Kulottunga Chola I and Vikrama Chola were instrumental in expanding the temple. Later the 14th century Chola rulers built the gopurams, towers and the huge walls.

Among the fascinating wonders, this temple is having the most astonishing huge stone chain. It is simply an architectural and artistic masterpiece entirely made of a single stone with a series of rings strung together without breaking the continuity.

The specialty of the festival:

The significance of this festival is that Lord Athi Varathar who is carved out of a huge Athi tree (fig tree) is residing inside the four pillars Mandapam of Pushkarni called Anantha Saras. He is taken out once in 40 years and is worshipped for 48 days. It is believed that worshipping this Lord Athi Varathar once in our lifetime is very precious. On these 48 days, Lord Athi Varadar offers darshan to the devotees both in reclining and standing posture.

An estimated one lakh devotees, including Governor Banwarilal Purohit and many other officials, dropped in at the Sri Devarajaswamy temple in Kancheepuram on Monday to take a look at the idol of Athi Varadar. The festival saw a turnout of over 1 crore people visiting the Varadaraja Perumal and Devarajaswamy temples in Kancheepuram this year. Such was the crowd that schools and colleges in the district were given holidays since students were unable to reach the institutions amidst the throng.

The story behind the Lord Athivarathar Temple

Lord Athi Varathar is one among the four Brahma Karachita Varadaraja Moorthies (i.e. worshipped by Lord Brahma). It is also said that the idol of Athi Varadar is carved by the great Vishwakarma who is the man behind the creation of the Celestial World “Devalokha“. Varadaraja means “the King who gives benedictions”, where Varada means “bestower of benedictions and raja means “King”.

The legend has it that once goddess Saraswathi asked Lord Brahma to announce the greatest between herself and goddess Lakshmi. Brahma without a second thought declared that goddess Lakshmi was the greatest. This aroused the anger of Goddess Saraswathi and went in rage. In meanwhile Lord Brahma was about to perform a Yajna and asked goddess Saraswathi to accompany him, but she refused. Even then Lord Brahma performed his Yajna without Goddess Saraswathi. This again triggered the anger of the goddess a lot more. In order to cease the sacred sacrifice of Lord Brahma, she took the form of river Vegavathi and reach the Yajna spot. To stop her Lord Vishnu Himself interfered in the course of Vegavathi and changed her course in the form of reclining Vishnu posture. Thus the Yajna ended well and in the end, Lord Brahma thanked Lord Vishnu and asked him to stay at Kanchi. Thus Lord Vishnu stayed at Kanchi and blesses the devotees.

Until the 16th century, this Moorthy(diety) was worshipped as the presiding deity inside the sanctum. During the Mughal invasion the statue was partially damaged and owing to that it was immersed in the temple tank (damaged statues should not be kept in the Garbhagraha). The present Lord that graces from the sanctum was brought from Pazhaya Seevaram which is about 20 kilometers from Kanchipuram. In memory of this, the Utsava icon of Lord Varadarajan is taken on a procession once a year, during the Tamil month of Thai (Jan-Feb) to Pazhaya Seevaram.

The Kanchipuram city government took great measures for the safety and easy darshan for the devotees. Lots of busses and transport facilities had been arranged for the Bhaktas. As it is expected that many thousands of people from different regions and countries will throng here, sings boards in five different languages had been placed all through the city.

With people from across the country flocking to Kancheepuram, the district administration and temple management left no stone unturned to ensure hassle-free darshan for devotees. Separate queues were made for the general crowd, VIPs and senior citizens, pregnant women and differently-abled people. Medical camps were set up at strategic points, along with facilities for parking, drinking water and restrooms.

Close to one crore devotees have visited Kancheepuram district from July 1 to August 16 this year(2019) to offer prayers to the deity. Lord Athi Varadar will be brought out from the Ananthasaras tank again in the year 2059.

You can experience a great celebration at Kanchi. There will be daily Aradhanas and Poojas done to the lord. Apart from that, there are lots of temples to visit and fare stalls where we can shop and eat.

Varadharaja Perumal temple is situated at the heart of the city. It is 75 kilometers away from Chennai, 35 kilometers from Chengalpet and just 30 kilometers from Arakonam. The city officials took great measures for the safety and easy darshan for the devotees during the time of the Athi Varathar Festival. Lots of buses and transport facilities had been arranged for the people thronging to worship him. As it was expected that more than thousands of people from different regions and countries arrive at the city, signboards in five different languages have been placed at strategic locations across the city.

By Bus: Transport in Kanchipuram is active throughout 24×7 and buses to all important cities are available.

By Air: There is no airport in Kanchipuram, and the nearest airport is in Chennai, which may take two hours to reach.

By Railway: Kanchipuram is well connected by rail, and has a railway station inside the city. Trains from Chennai, Madurai and Trichy arrive often. There is always a continues electric train facility available between Kanchipuram and Chennai.

Plan and visit Kanchipuram while your trip to Tamilnadu. This place is apt for both pilgrims and shoppers. Tamilnadu Tourism offers you the best-customized tour packages to Tamilnadu based on your comfort.

For more details, feel free to visit www.tamilnadutourism.com and get the free quotes for your itinerary.

Enquire now and grab the best deals and offers only at Tamilnadu Tourism.

One thought on “Athi Varadhar 2019: A Grand Celebration Once in FORTY Years!”