Are you looking for waterfalls with miraculous water that can cure all your body ailments and make your body rejuvenated, then Courtallam is your destination. This famous waterfall is the summer retreat for Tamilnadu people. 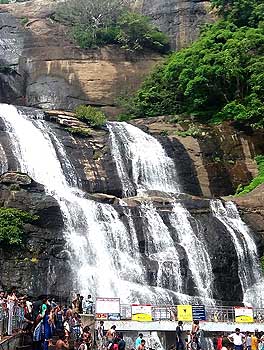 This waterfall ranks first in attracting lots of tourists every year. This lovely waterfall is what one need to heed to escape from the scorching sun. The Courtallam waterfall is a combination of nine waterfalls, each differs in size, volume of water, height and water current.

Speciality of the place

These falls are considered to be natural spa, which could remove all your body pains. The river sources of thess falls are River Chittra, Manimutharu, Pachaiyar and Tamirabarani which cascades over 60m-92 m. The bitter part of this falls is, during season time, it will be over crowed and thronged with people.

Apart from these falls, this place is famous for Tirukuttralanathar Swamy temple dedicated to Lord Shiva and another Murugan temple. People after taking bath in these falls visit these temples and seek the blessing of Almighty. The temple has inscriptions about Chola and Pandya Kings. Chitra Sabhai nearby exhibits paintings from the Puranas and is believed to be one among the five Sabhas where Lord Nataraja is said to have presented his cosmic dance.

Courtallam is a great place to take bath, wallow in the waters to have oil massage and to do lot more fun filled activities.

As the name itself suggests Main falls is the major attraction among the nine falls. It is the largest falls among the nine falls, cascading from the height of 60 m. The water here is believed to have many medicinal powers as it comes from dense ayurvedic herb forest. This is the only falls that has water even in off season.

Shenbaga falls is situated among a lovely ambiance; it can be reached by an hour uphill trekking from Main falls. Near to this waterfall is the Shenbagadevi temple, famous on full moon days. On certain auspicious full moon day, lots of pilgrim’s throng at this temple.

Just at a 4km distance from Main falls is the Honey falls. This waterfall is considered to be the most beautiful falls with enchanting panoramic view. This horseshoe shaped falls, has water falling vertically from all three sides, and so it is not suggested for all, as it may be dangerous to take bath. The trek to this waterfall is also quite challenging.

Tiger falls is one of the safest falls and is best place to take children. This small waterfall is located at the distance of 2 km from Courtallam bus stand. Adjacent to this waterfall is the Sastha temple, which is a pilgrimage spot for Iyyappan devotees.

This enchanting waterfall attracts millions of tourists every year. This waterfall is separated into five sections and water cascades from all the five in an amazing amount. Among these five falls three is for men to use and two for women. It is small belief among the locals that the five partition of this falls denotes the five heads of hooded cobra. Near to this waterfall are many fruit stalls that sell forest fruits such as lichees, eggfruit, and mangosteen.

This waterfall is situated at the distance of 10 km from the centre of the town, beside the road to Tenkasi. This waterfall is 200 ft high and has step cut out in the rock to break its free fall. Provisions are there for men and women to bath separately. This falls is less crowded when compared to other falls.The other important falls at Courtallam are Fruit Garden or Orchard Falls (Pazhathotta Aruvi); and New Falls (Puthu Aruvi), and then there is the Agasthiyar falls. From

Best time to visit all the falls is from Jully to late August. On other months the water density will be very less or overflowing. During summer, few of these falls may even drain and will be running out of water. At every falls Tamilnadu government collect minimum fare for adults, for parking they collect Rs 10 per vehicle.

Courtallam is highly sought-after destination is Tamilnadu and is located in Tiruneveli district. So, busses are available from all major cities. There are high bus frequencies from Tirunelveli, Madurai and Tenkasi. As there are many falls nearby to visit, people prefer hiring a taxi of tempo.