Situated near Mahabalipuram, the Alamparai fort is a popular tourist attraction. In the early days of its construction it served as a sea port and overlooked the sea. It belonged to the Nawab of Arcot and later went into the hands of the British after which it was demolished and is now seen in ruins. It was once a bustling trade point. 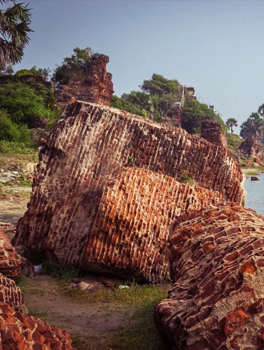 The Alamparai Fort exhibits a gloomy yet an alluring aura which pulls tourists and history buffs to it. As you get into the fort, you can feel the ruins of the fort speaking to you as though trying to tell you the tale of its lost glory.

The fort was constructed in the Mughal reign during the 18th century AD. You will be surprised at the number of life forms that have made the fort their home in the past years and throng upon it as though supporting the fort. The view from the fort is an entrancing one and is sure to take your breath away.

By Air - The Chennai airport is 40 kilometers away from the Alamparai Fort and is the nearest one.

By Rail - The nearest train facility is available at the Chennai Egmore railway station which is the nearest one from the fort.

By Road - The Alamparai fort is very well accessible by road from all major towns and cities and you can also hire a cab to reach the fort.