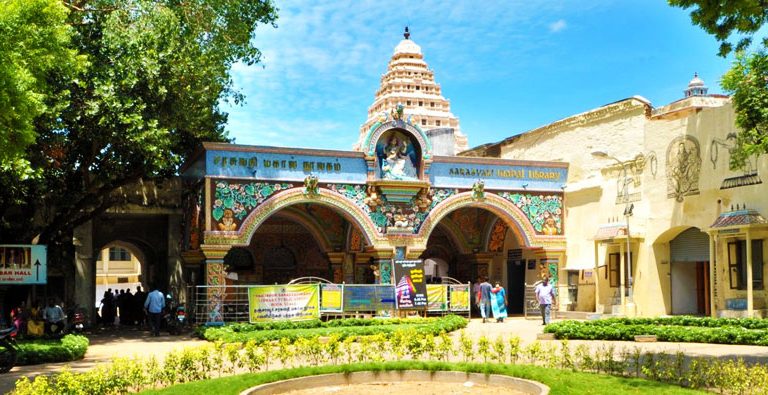 Tamil Nadu is an incredible land, blessed with rich cultural and religious heritage. Its perfect mix of ancient tradition with modernity makes it a special place to visit where one can delve into its past cultural heritage with all the modern comforts. It is a much-sought-after tourist destination in South India that is home to innumerable temples, beaches, heritage sites, monuments, picturesque landscapes, and endless natural wonders.

Tamil literature has a wealthy and long literary tradition that spans more than two thousand years and is said to be the oldest of all Dravidian languages. Hence, Tamil Nadu houses many libraries attracting a lot of literary lovers. From the biggest library in the state, Anna Centenary Library to Connemara Public Library, Saraswathi Mahal Library, the list goes on.

Among them, the Saraswathi Mahal Library, situated in Thanjavur is said to be one of the oldest libraries in Asia. It is noted for being one among a few libraries in the world with texts of the medieval period. The Saraswathi Mahal library was initially started as a Royal Library for the private pleasure of the then Kings of Tanjavur (Nayaks of Tanjore) who ruled from 1535 CE till 1675 CE and is placed within the campus of the Tanjavur Palace.

The Saraswathi Mahal Library is noted for its rare collection of Palm leaf manuscripts and paper written in Tamil, Sanskrit, Hindi, Telugu, Marathi, English and a few other languages indigenous to India. Though the collections comprise over 60,000 volumes, only a tiny fraction of these are on display.

The library activities are computerized and have a complete catalogue of holdings which is being made available online. This Library supports efforts to publish rare manuscripts from the collection and also ensures that all volumes are preserved on microfilm. Another exclusive feature of Saraswathi Mahal Library is that it holds medical records of Ayurveda scholars which includes patient case studies and interviews in the manuscripts classified under the Dhanvantari section.

The Saraswathi Mahal Library also houses a museum to reveal the importance of the Library to the Public. The exhibits are arranged in various sections like Tanjavur-style Paper Paintings, Canvass Paintings, Wooden Paintings, Glass paintings, Portraits of the Tanjavur Maratha kings, Ancient Manuscripts, Illustrated Manuscripts, Printed copies of the Original Drawings, Atlases, and the Physiognomy charts of Charles Le-Brun.

It is regarded as one of the best historical libraries in India, hence a must-visit for history lovers. Due to its educational significance, it is an ideal place for students too. Architectural buffs can also have a wonderful time here. The visit to the Saraswathi Mahal will be completely experiential if they are guided by a historian or a guide.

Come and explore the valuable treasures of Saraswathi Mahal Library on your trip to Thanjavur.

Tamilnadu Tourism will help you to plan a perfect holiday trip to Tamilnadu with its well crafted customized tour packages at the best prices.

Enquire now and get the best deals and offers!