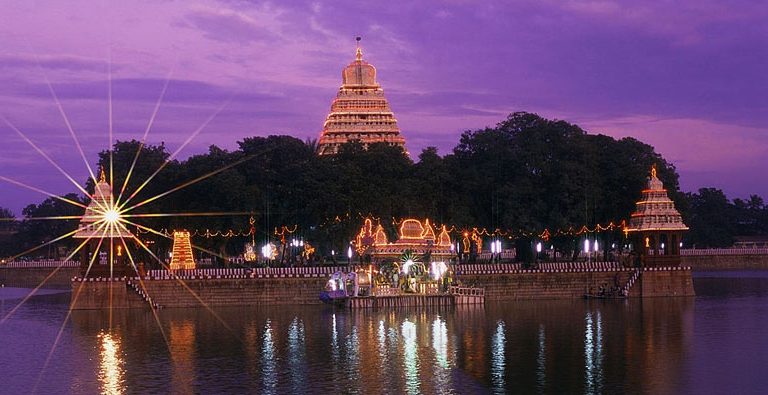 Madurai the prestigious land that nurtured the Sangam Tamil language is widely known as the temple town of India. This ancient land ruled by many dynasties and underwent lots of transformation is now a developed city with a mixed culture and tradition. This lovely heritage city is not only famous for temples but also known for the two major grandeur festivals, one the Meenakshi Sundareswarar celestial wedding and the other Mariamman float festival. The diversity that Madurai offers is evident in the rich cultural heritage.

Be it any time of the year Madurai has some of the other celebrations to veer the tourists from across the world. This float festival is one of the remarkable festivals of Madurai which is celebrated mostly in the month of January or February. This year 2020, the Mariamman float festival falls on the 8th of February 2020. It a rare sight to behold the enchanting decorations and eye snatching processions. The whole mesmerizing celebration happens at the Vandiyur Theppakulam opposite to the Vandiyur Mariamman temple in Madurai.

The Theppakulam tank is one of the icons of Madurai city, built-in the year 1646 by Thirumalai Nayak, the center of the tank holds an idol of Lord Ganesh installed atop a platform. According to legend, the place was found when the land was excavated to make bricks for constructing the Thirumalai Nayakar Mahal. The vacant area was converted into a tank and was dedicated to Lord Ganesh then. It is a huge tank in 16 acres, located nearby the Mariamman temple, situated at a distance of about 3 km from the Meenakshi Amman temple.

Literally, Teppakulam means temple pond, mainly used for devotional festivals. The tank is connected to the Vaigai River through an ingenious system of underground channels. It has a total of 12 long steps made of granite on all four sides. In the center of the tank, there is a Mandapam called Maiya Mandapam (Central Mandapam) with the Ganesh temple and a beautiful garden.

Madurai Float festival or Madurai Teppakulam Festival deserves a special mention among the festivals of Tamilnadu, as it is one of the most gorgeous and grandeur celebrations in South India. Most often the float festival falls in the late of January or the beginning of February. On the full moon night, the complete celebration takes place as per the tradition.

On the eve of the Float festival, Madurai Meenakshi Amman temple remains closed as the Moolavar effigies of Lord Sundareswaran and Goddess Meenakshi were brought out for the procession.

On a full moon day, ornamented icons of goddess Meenakshi and her consort are taken out in a colorful procession to the huge Mariamman Theppakulam. The golden palanquins carry the effigies of the Lords, escorted by the temple elephants. Till evening the Lord and Goddess are stationed beside the banks of the Theppakulam and graces to the devotees. To view this spectacular procession, people throng around the sacred tank. The island is lit with lamps and decorated with colorful lanterns and flowers. Next to this festival is the celestial wedding of Lord Sundareshwarar and Goddess Meenakshi, this is a ten days festival that takes place with great pomp and fervor.

To more about the tourist attractions of Madurai (click here…)

Reaching Madurai is not a big deal, as this famous town has frequent transport facilities from all over the state.

By Airways: Madurai has Madurai International Airport at a distance of 12 km from the city. Holding a strong domestic network, Madurai airport is frequented with direct planes to major Indian metros including Chennai, Mumbai, New Delhi, Hyderabad and Bangalore. From the airport surplus cabs are available, which you can hire to reach your desired destination.

By Railways: Madurai Junction is one of the busiest junctions in South India. Trains to all major parts of the country are available here.

The reasons are numerous to make a visit to this vibrant city. Having lots of places to visit from the ancient Meenakshi Amman temple to the modern Vishal de mall, Madurai serves the interests of all kinds of tourists and travellers.

Miss not this unique grandeur festival and take part with your family.

Get into a festive mood by visiting the Float Festival of India in Madurai Tamil Nadu.

Make a trip to Tamilnadu and give a visit to the ancient city Madurai; witness the float festival and get drenched in the blessing shower of the Almighty.

Check out our different packages that match your requirements. If you are not comfortable with these packages you can also design your own customized tour packages with the help of our tour experts.

Book with us right now for a flawless fabulous trip.

We welcome all your valuable comments and queries regarding this post. And don’t forget to add some of the unique festivals that you know and wish to take part in.